Quiche makes a great dish for a weekend breakfast or brunch, or even for a light lunch. Baked eggs, flaky crust, and your favorite fillings – quiche truly is a classic meal! The only problem with quiche is that tends to be pretty light, plus you're limited to 1 type of filling... until now, that is! This triple layer veggie & cheese quiche is taking your favorite baked breakfast treat to the next level. Instead of 1 layer, this quiche gets loaded up with toppings inside 3 delicious layers, chock full of delicious veggies and mozzarella cheese. It makes the perfect main course for a brunch with friends or a satisfying dish for the whole family. Breakfast just got a whole lot heartier!

For the homemade puff pastry dough:

For the quiche filling:

For the vegetable filling:

1. For the crust, either use 5 sheets of pre-made puff pastry dough, or start by combining the flour and salt in a large mixing bowl, then add in the water. Combine the ingredients by hand, or use a hand mixer with a dough hook. Knead the mixture for 10 minutes until a smooth dough forms, then cover the bowl with a plate or plastic wrap and let it rest for 20 minutes. Once the dough has rested, divide it into 3 equally sized pieces and cover the pieces you aren't working with. Roll 1 of the pieces of dough into a large circle about 1 ft in diameter. Slice the edges of the dough into 6–8 segments, leaving a 5-inch ring in the center that's uncut. Brush some of the softened butter onto the center of the dough, then stretch 1 of the outer segments of dough over it until the butter is covered completely. Repeat this process until all of the 6-8 segments have been used, then tuck the edges of the dough underneath. Transfer the dough to the refrigerator and let it rest. Repeat this process with the remaining 2 pieces of dough. For the quiche filling, combine all of the ingredients with an immersion blender until the mixture is combined. 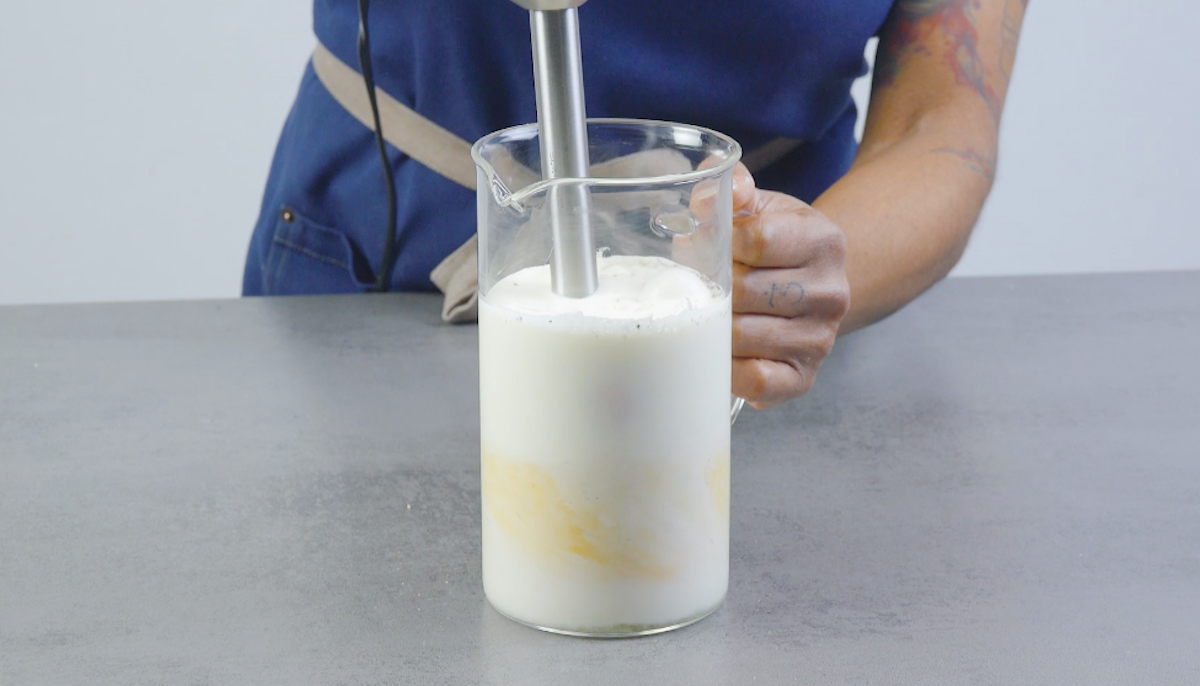 2. Preheat the oven to 400°F and line a baking tray with parchment paper. Slice the bell peppers and cut the carrot into thin slices, then place them on the baking tray, drizzle some olive oil on top, and season them with salt & pepper. Transfer the baking tray to the oven and bake the vegetables at 400°F for 15–20 minutes. Once they've baked, remove vegetables from the oven, place them in a large mixing bowl, and let them cool. Repeat this same process with the mushrooms, adjusting the baking time as necessary, then lower the temperature of the oven to 350°F. Slice the red onions and sauté them in a frying pan with some olive oil. Add in the minced garlic, season with salt & pepper, and cook over medium heat for 20 minutes, until golden brown and caramelized. Once the onions are finished cooking, remove them from the heat, transfer them to a large mixing bowl, and let them cool. Grease a 9-inch springform pan with softened butter. If you made your own puff pastry dough, roll out the dough into 5 equally sized circles. Line the springform pan with the first layer of rolled-out dough or puff pastry sheet. Press the dough into the sides of the springform pan so that both the bottom and sides are covered, then add a layer of caramelized red onions, cooked spinach, peas, and roasted mushrooms on top. 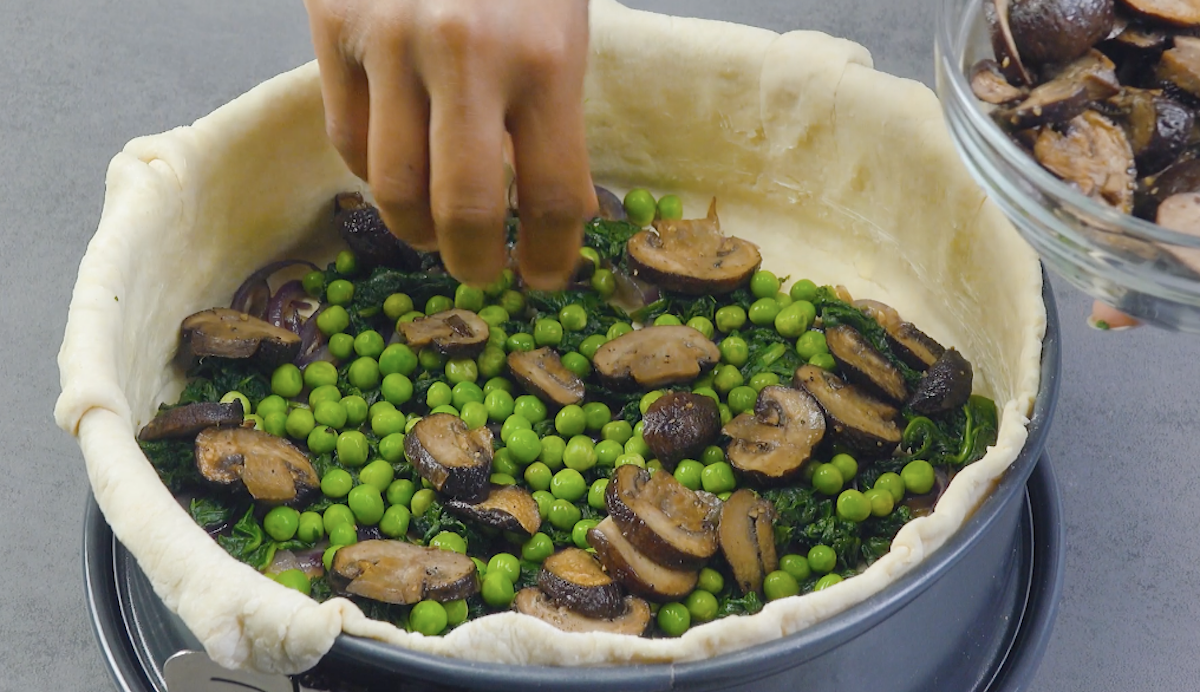 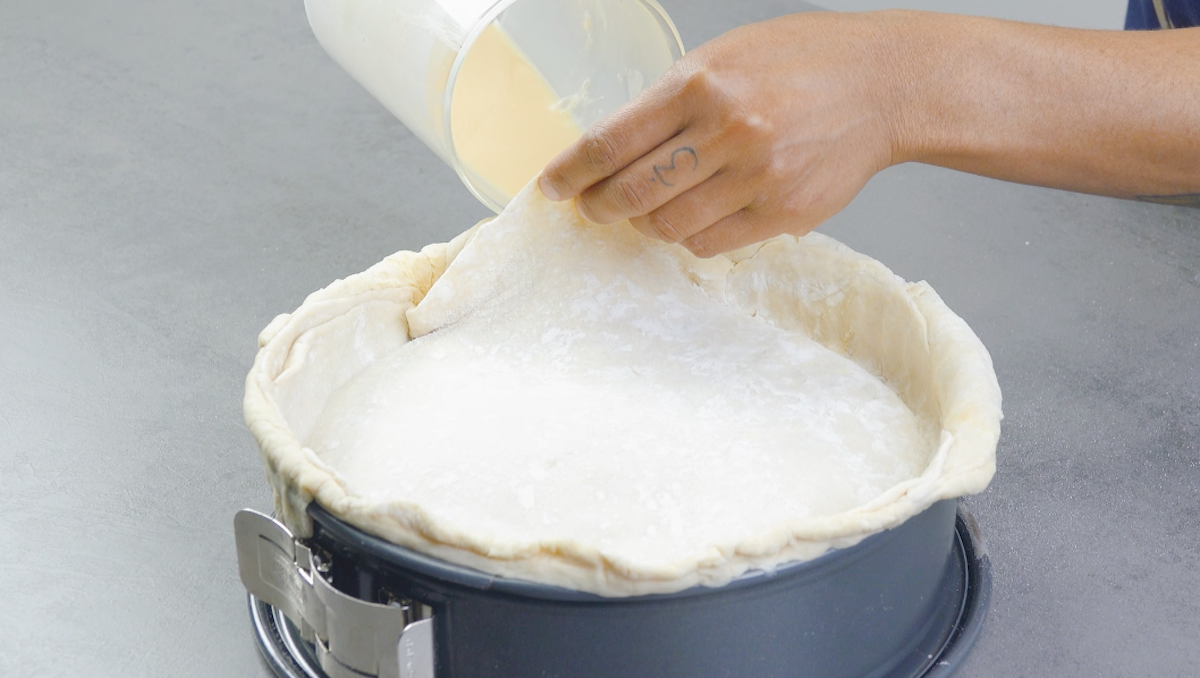 4. Place the roasted bell peppers and carrots on top of the layer of dough, spread them around evenly, and place another sheet of dough over them. Press the edges firmly against the sides of the springform pan, leaving an opening, and pour ⅓ of the quiche filling inside. Press the open edge of dough against the side of the springform pan, sealing in the second layer. 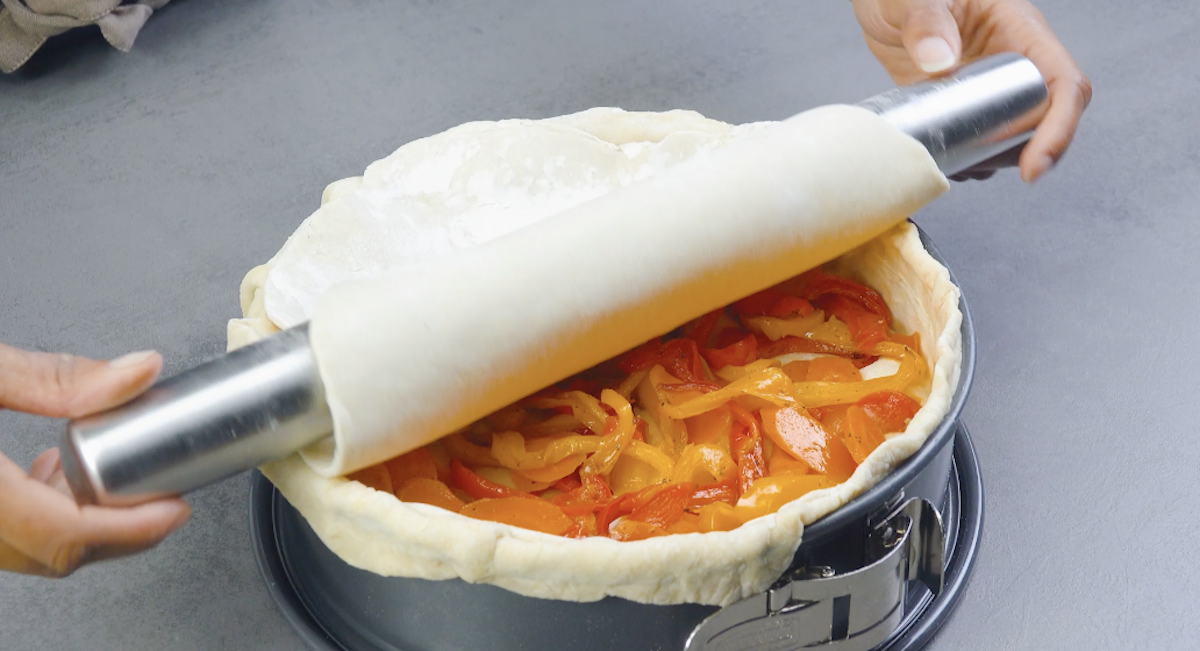 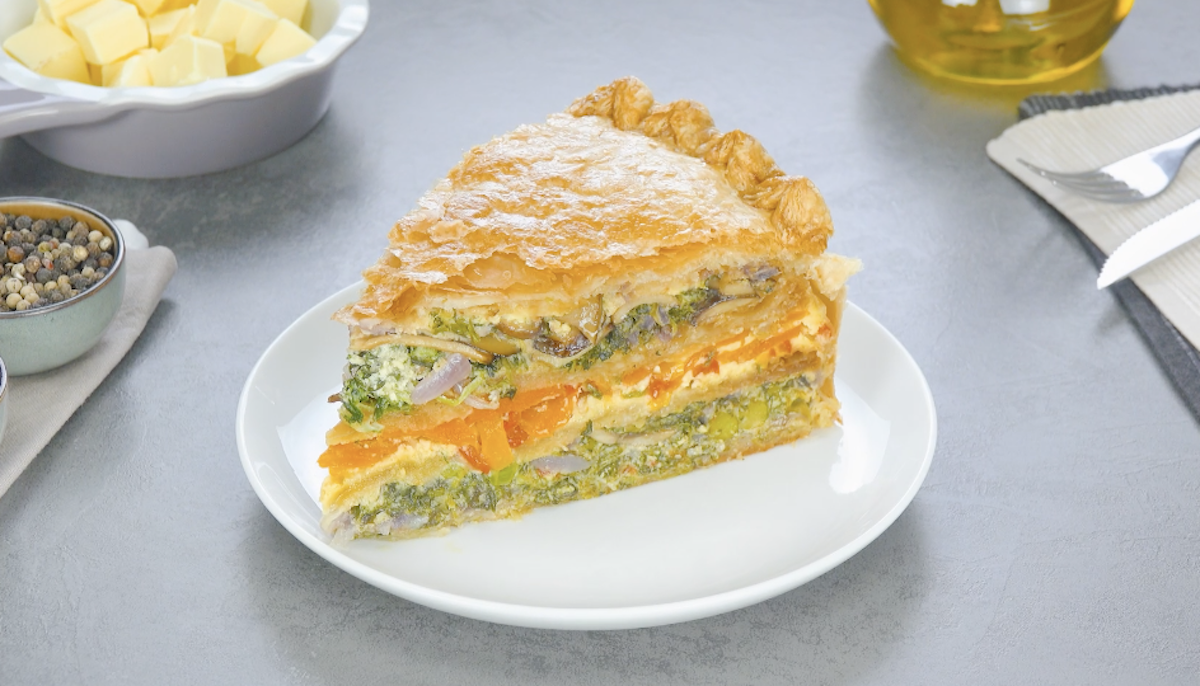 This triple layer quiche is 3 times the fun as a normal one! It looks spectacular once you slice into it, and it tastes absolutely delicious. More is definitely more in this case!

Get the recipe for the Penne Pasta In A Homemade Bread Bowl featured in the bonus video.