Combining dinner and dessert into 1 dish might be one of the most revolutionary things we've ever done! With our split decision pie, you get the best of both worlds – the ultimate comfort food combo that takes half the effort. The first half of this amazing recipe is stuffed with chicken pot pie, arguably one of the most comforting, flavorful dishes in the world. After eating your mouth-watering chicken pot pie for dinner, it's time for dessert! The second half of this dish is a sweet, scrumptious apple pie, baked to perfection. You'll never have to decide between a homemade dinner or a homemade dessert ever again!

For the pie crust:

For the apple pie filling:

For the chicken pot pie filling:

1. For the pie crust, start by mixing the flour and solidified coconut oil together. Next, stir in the sugar, salt, and water. Knead the mixture into a smooth ball and refrigerate for 1 hour. 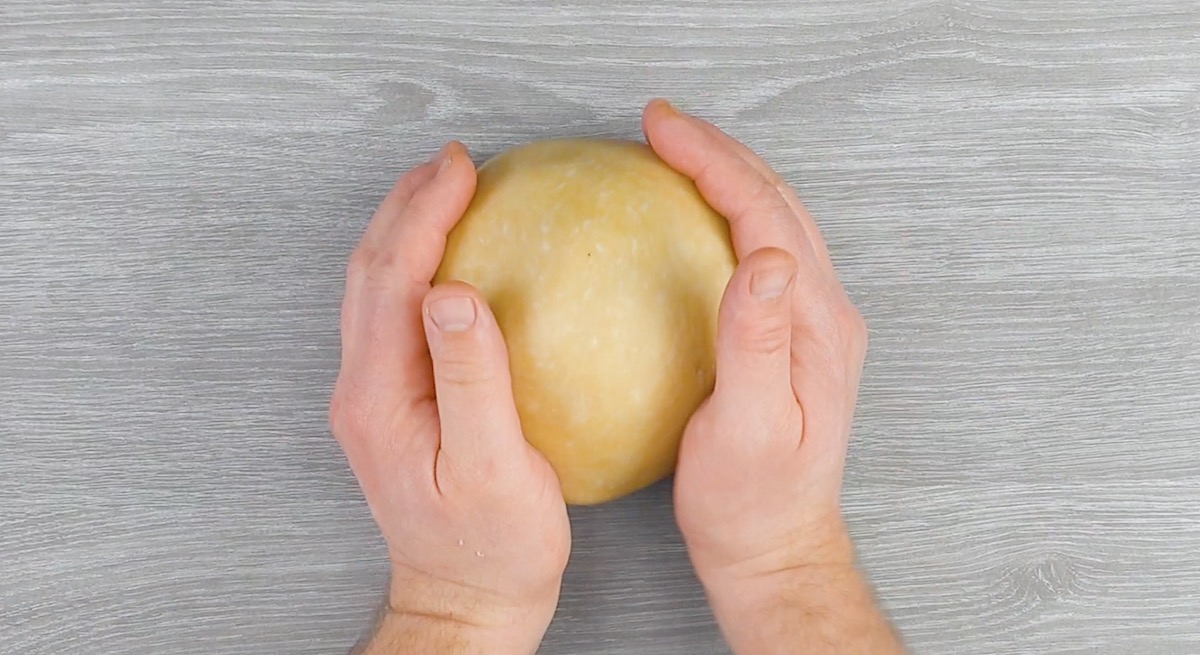 2. While the dough is chilling, you can get started on the 2 pie fillings. For the apple pie filling, peel and slice the apples, then stir in the rest of the listed ingredients until combined. 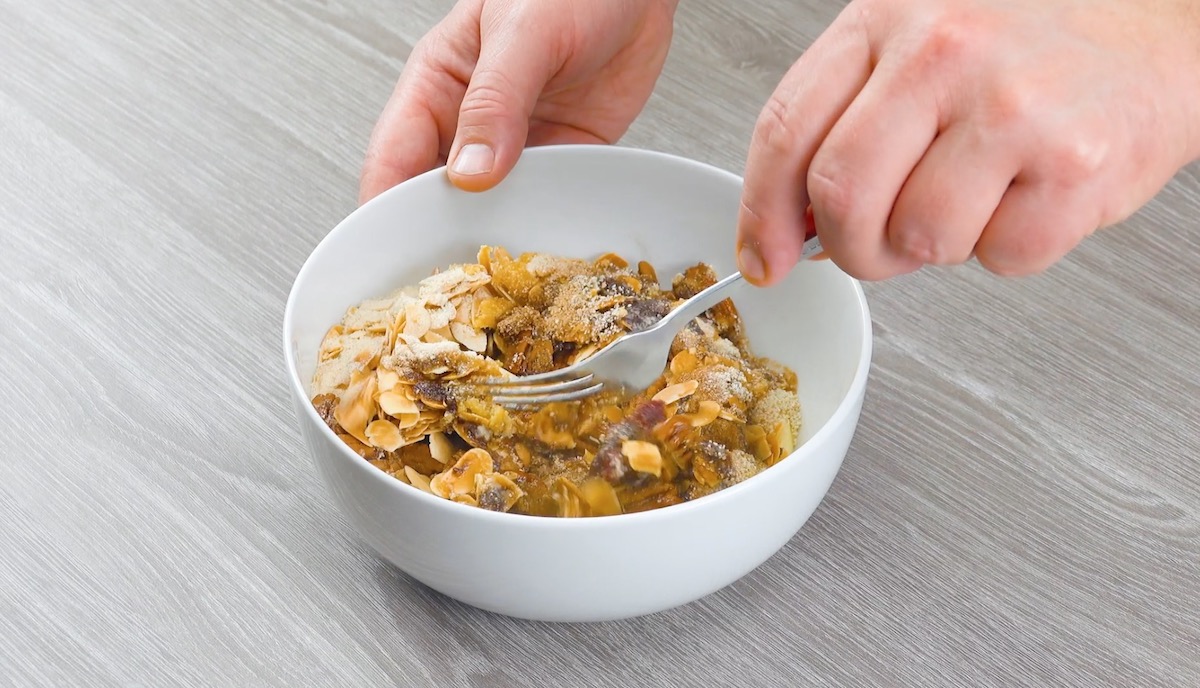 3. For the chicken pot pie filling, heat a skillet over medium heat with some vegetable oil. Season the the chicken breast and fry until golden brown. For extra tender chicken, pour some broth into the skillet, then cover and let simmer for 20 minutes, stirring occasionally. Remove from the heat and let the chicken cool, then use a fork to pull the meat apart. Next, heat the skillet with some vegetable oil and briefly fry the garlic and onion. Add the shredded chicken breast, carrots, mushrooms, peas, paprika, and chicken broth. Whisk together the milk and corn starch, then pour the mixture into the skillet with the other ingredients. Finally, stir in the cream cheese and shredded mozzarella and season with salt and pepper to taste. 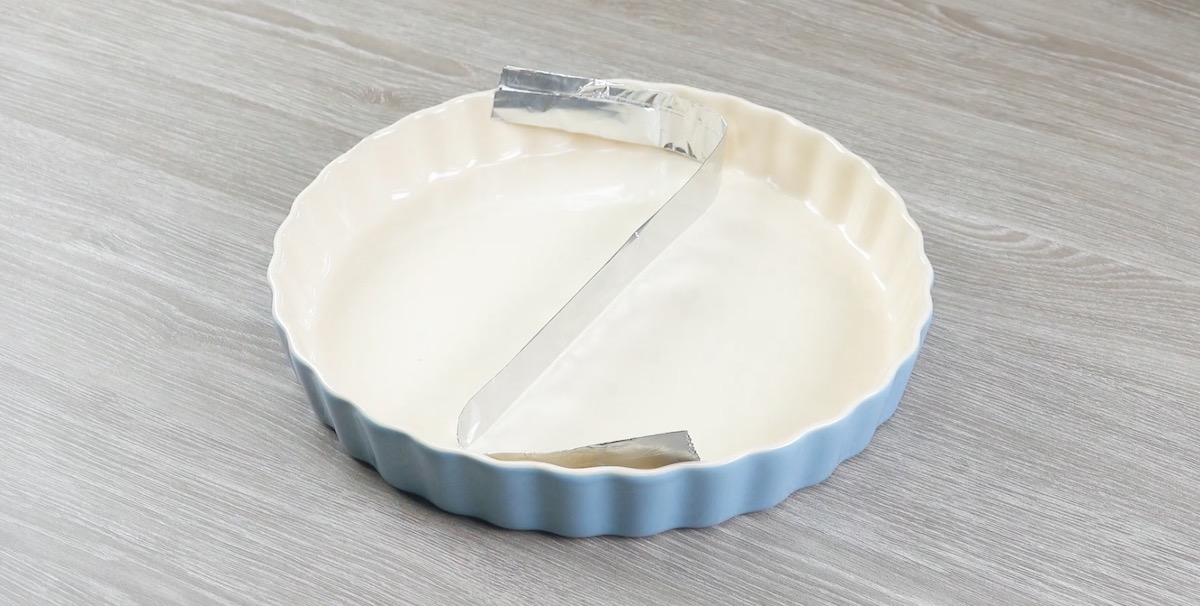 5. Halve the pie crust dough and roll out 1 half. Cut the rolled-out dough in half and place 1 dough half in each half of the pie dish. 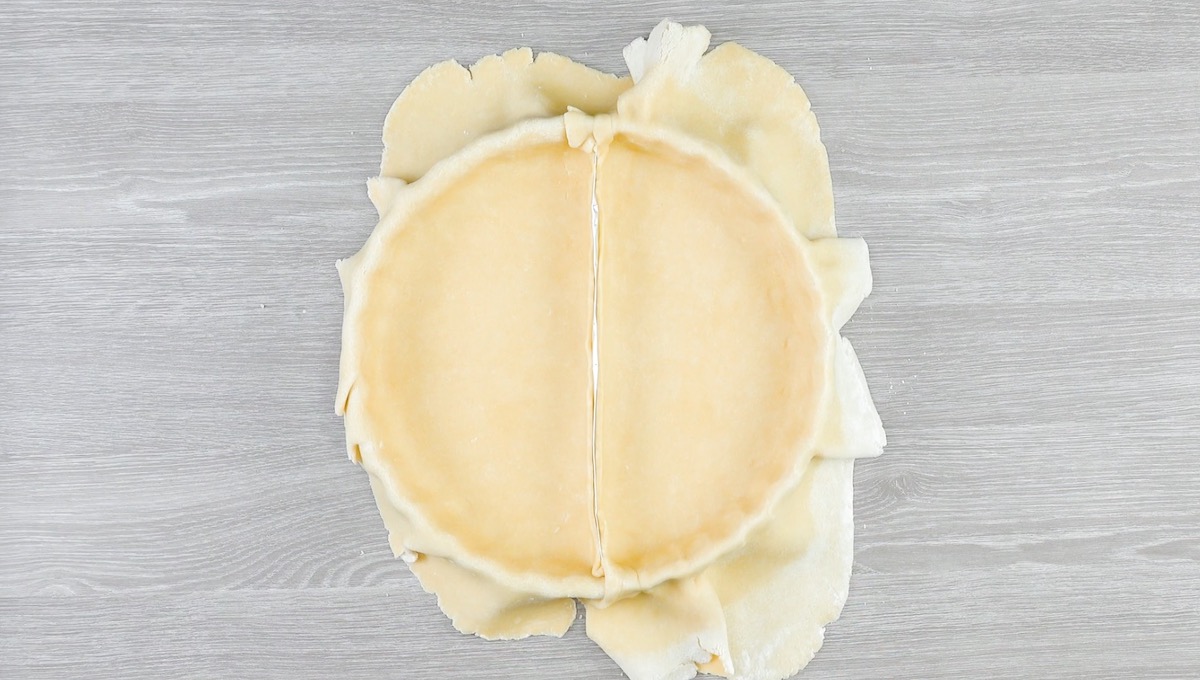 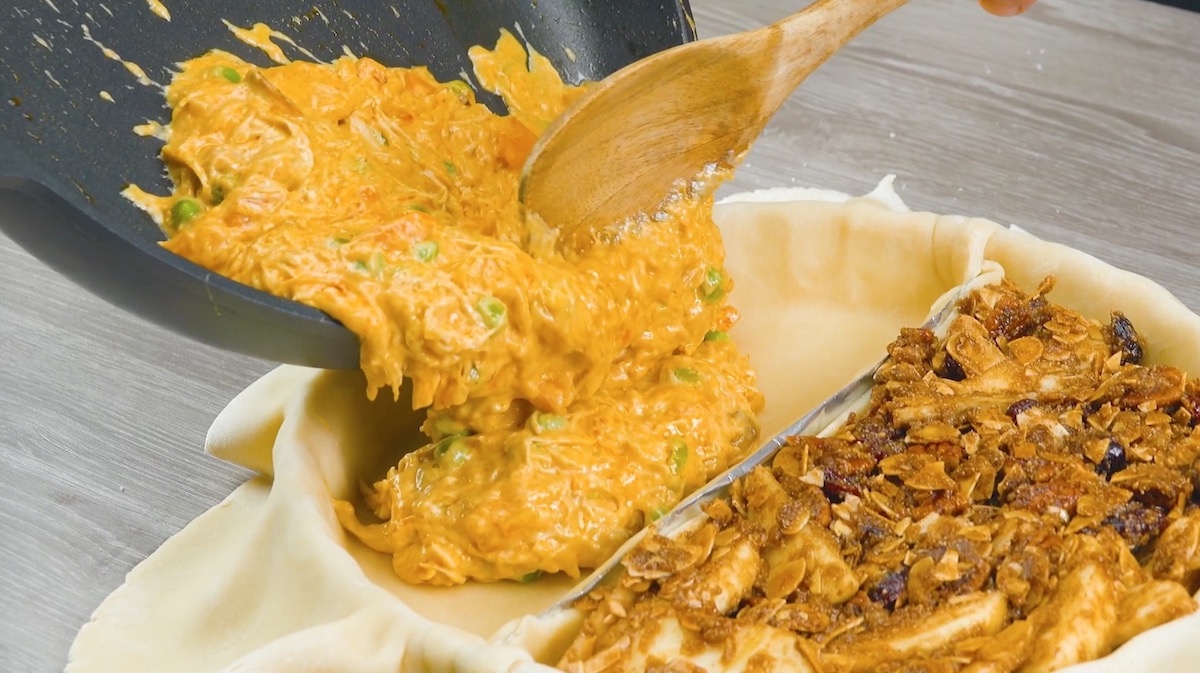 7. Roll out the second half of the pie crust dough and cut it in half. Use 1 of the halves to cover the chicken pot pie filling. 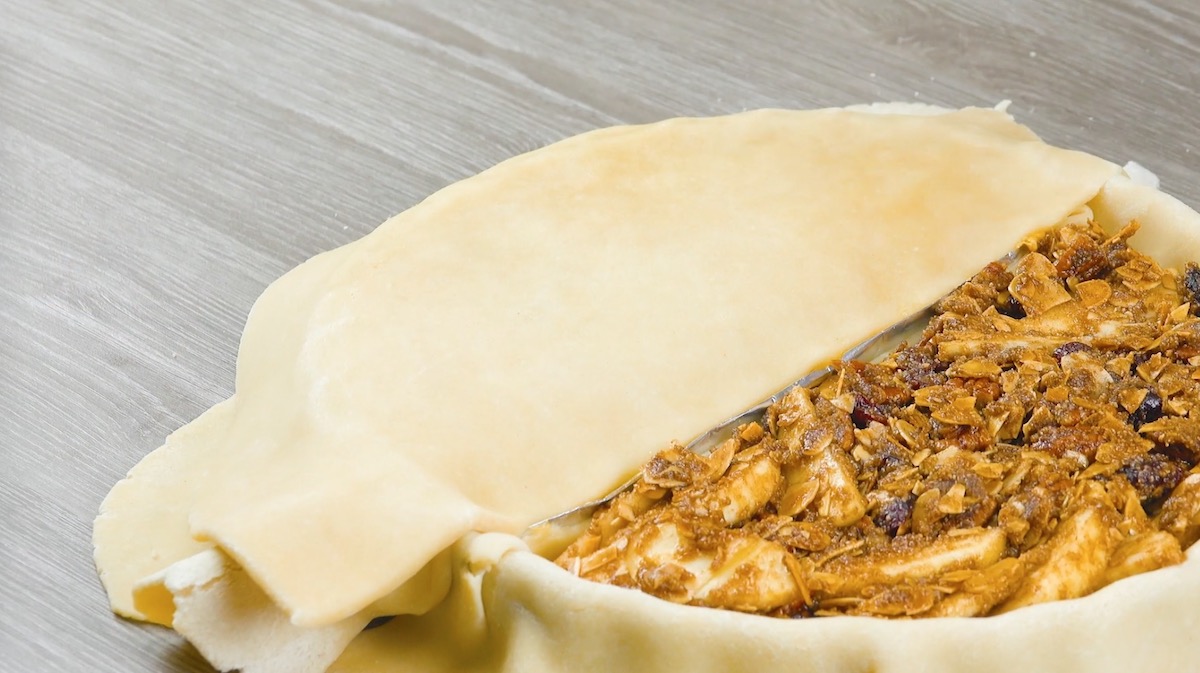 8. Cut the other dough half into strips and weave them together to create a lattice top pattern, as shown in the video. Carefully place the lattice top over the apple pie filling and trim the edges to get rid of any excess dough. Refrigerate the split decision pie for a few minutes to make sure the crust holds its shape. 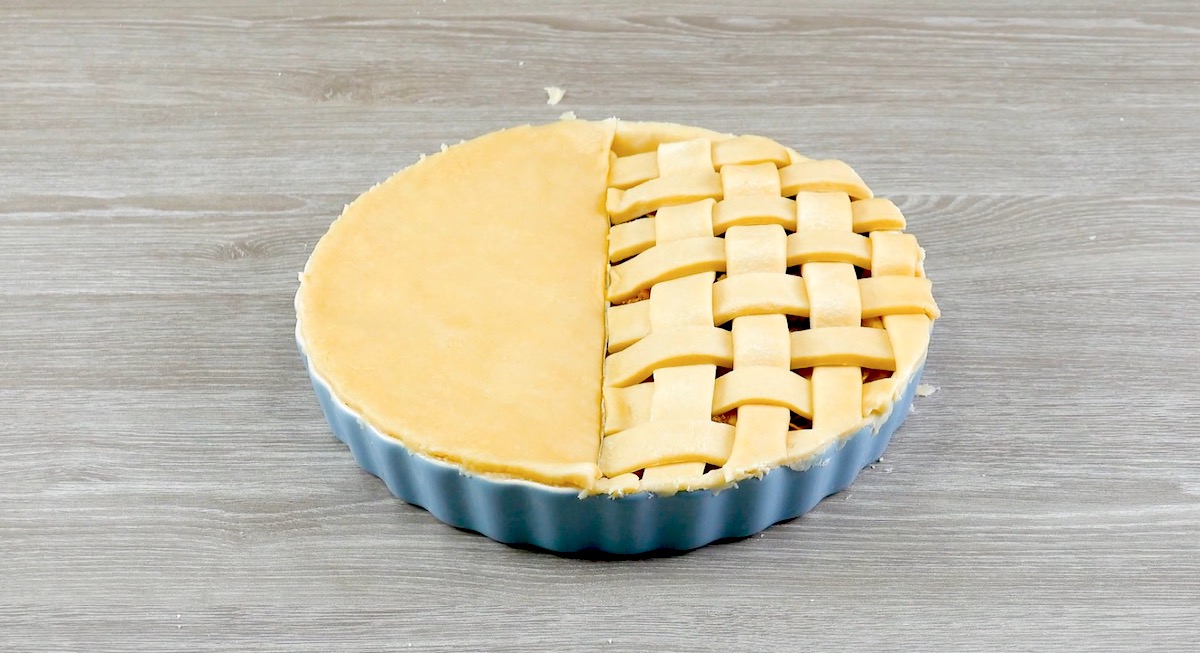 9. Make a few incisions in the chicken pot pie crust to let steam escape while it's baking. Transfer the pie dish to the oven and bake at 375°F for 40 minutes. 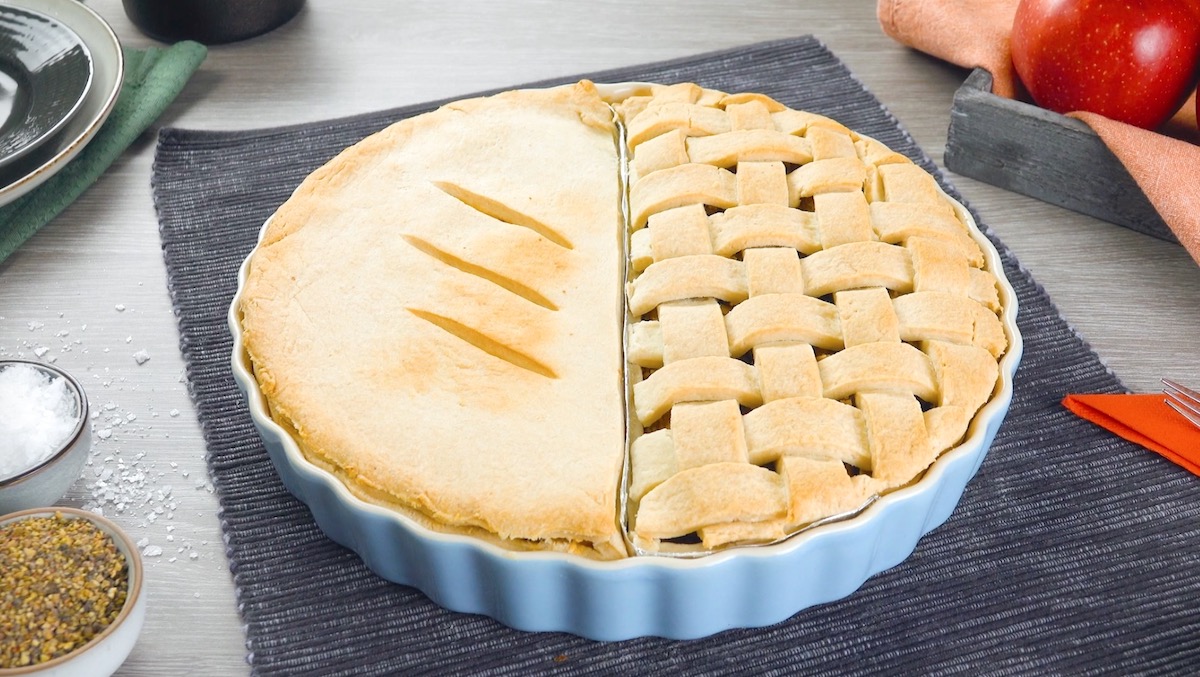 Have you ever seen a whole meal for served in just 1 dish? This beautiful win-win of a pie combines 2 of the most beloved American culinary classics, so it's sure to be a big hit with your dinner guests. Plus, doing the dishes afterwards will be as easy as pie!

Get the recipe for the Brazilian Chicken Pot Pie featured in the bonus video.