The Germans came up with "spaghetti ice cream" almost 50 years ago in the city of Mannheim, and ice cream cunningly disguised to look like a plate of spaghetti has been popular there ever since. Creations like Pizza Ice Cream soon followed. And now, we bring you the latest innovation in this dessert revolution: a sweet treat that looks like a main course — and doesn't contain a single scoop of ice cream. The following recipe shows that you can create an amazing variation on Spaghetti with Meatballs, without needing any ice cream, or spaghetti, or meatballs.

For the strawberry sauce:

First beat the egg and sugar together with an electric whisk until they are foamy. Then stir in the pudding mix, the salt, the baking powder, the flour and the cornstarch. As soon as you have a smooth batter, transfer it into a springform pan, it's best to use one that's 7 inches in diameter, and then bake it for 30 minutes in a convection oven at 360°F. 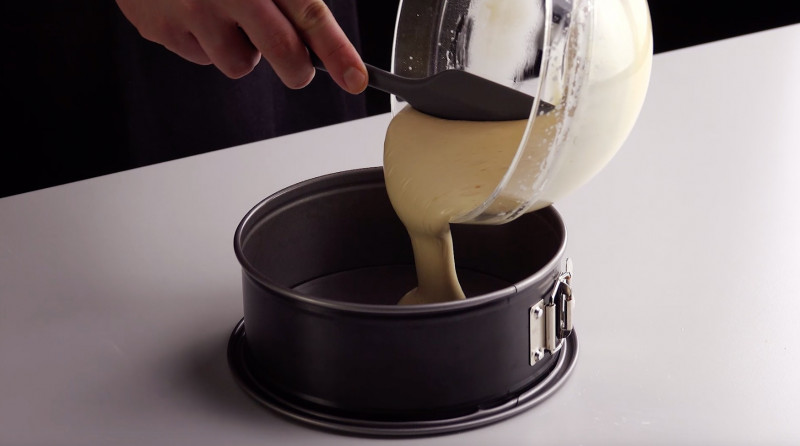 Let the cake base cool and then cut it in half horizontally with a large serrated knife. Then lay the top half to one side. 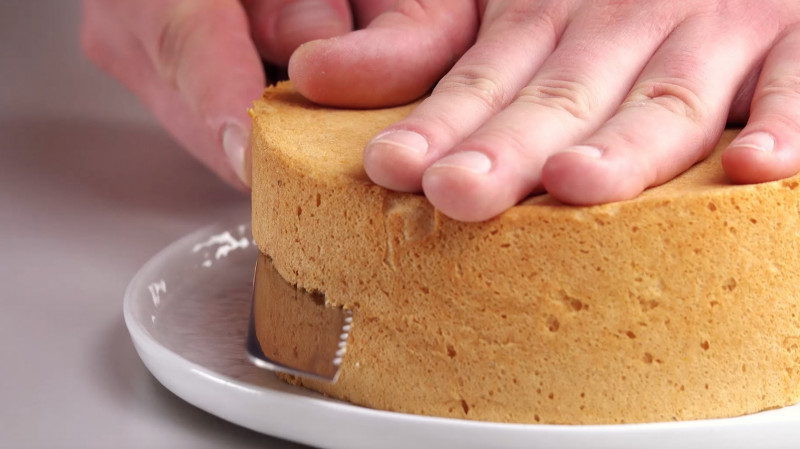 For the buttercream, first mix the egg whites, vanilla flavoring and icing sugar together with an electric whisk. Then stir in the butter a little at a time. As soon as you have a consistent cream, put it in a piping bag and squeeze out a thick stripe along the the edge of the cake base. 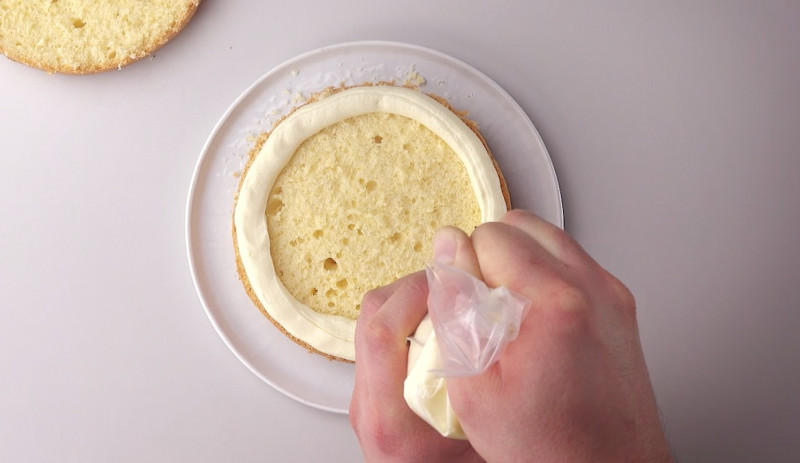 Let the sugar melt in a pan and then add the strawberries. Grate in some lemon zest according to your taste. Then, squeeze in the juice of a lemon. Let everything come tot the boil together before letting it simmer for a little. Puree the mixture into a sauce, let it cool down and spread about ¾ of it on top of the cake base, inside the buttercream. 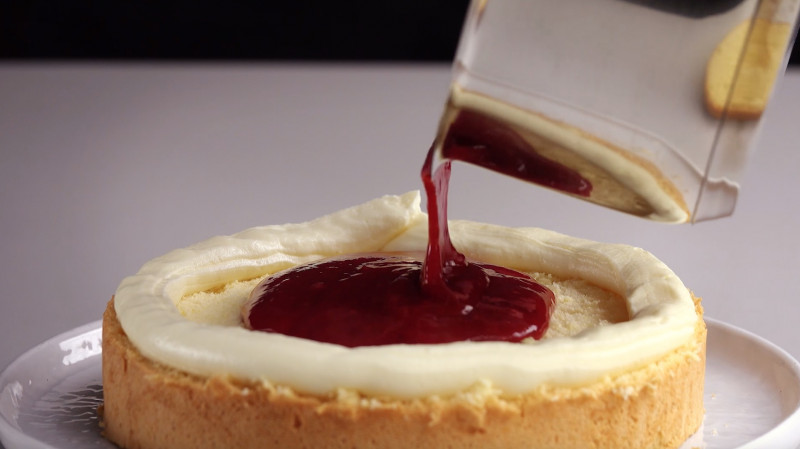 Set the upper half of the cake on the cream and strawberry sauce and press down very gently. Squeeze out the rest of the buttercream onto the cake and use a spatula to spread it evenly over the top and round the side. 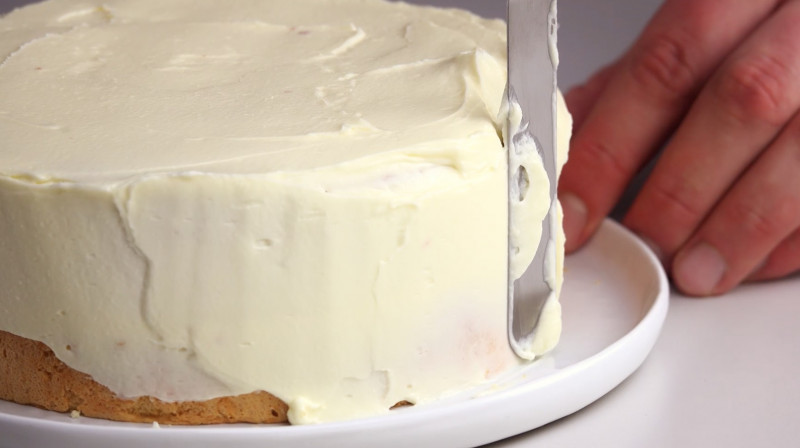 For the next step, prepare the vanilla pudding according to the instructions and let it cool down until it's no longer a liquid, then put in a piping bag with a fine nozzle. Squeeze out irregular lines over the cake, place three chocolate truffles on top and then continue drawing lines of pudding with the piping bag. Put the rest of the chocolates on top of the "spaghetti" and then add the rest of the pudding on top. 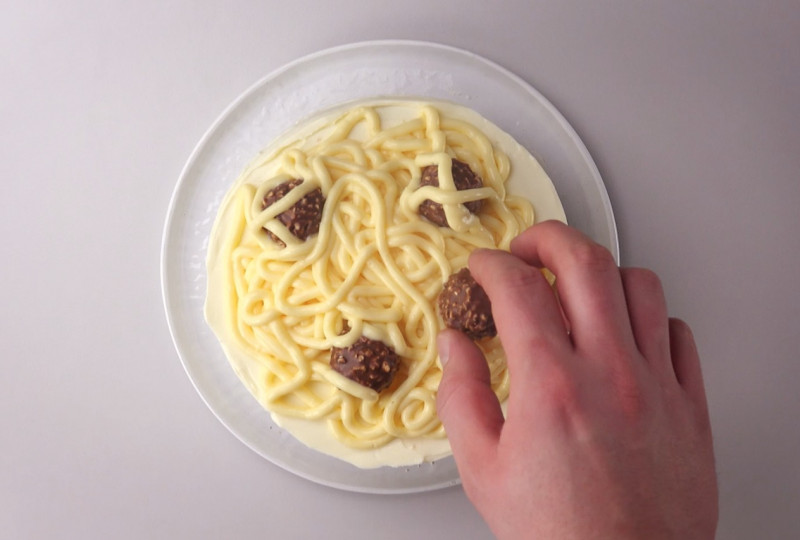 For the "tomato sauce" effect, use a spoon to apply the rest of the strawberry sauce on top of the spaghetti. As the icing on the cake(!), you can grate some white chocolate on top — the way you would for Spaghetti Ice Cream! 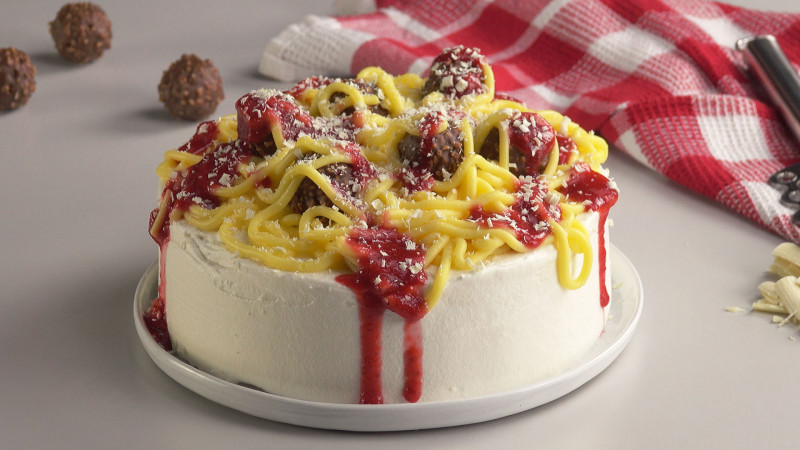 At first glance, your eyes won't quite believe it what they're seeing. And then when you try it, you won't quite believe what you're eating, because it's so unbelievably tasty. And this dessert has one great advantage over Spaghetti Ice Cream — it doesn't melt — so you have time to savor every last bite!