Pork Dumplings With A Mozzarella And Bruschetta Filling

When most people think of pork, they're going to eventually think of dumplings. Delicious, plump dumplings with a nice pork filling are a total classic. But what if you could make a dumpling out of the pork itself? Well, guess what – you can! First you're going to flatten a bunch of pork chops until they're thin enough to put on a skewer, then you're going to stuff each pork dumpling with mozzarella and a bruschetta filling. This is some gourmet-level stuff you need to try!

For the pork dumplings:

For the bruschetta & mozzarella filling:

For the bacon tomato cream sauce:

1. Cover the pork chops with plastic wrap and flatten them to about ⅛ inch. 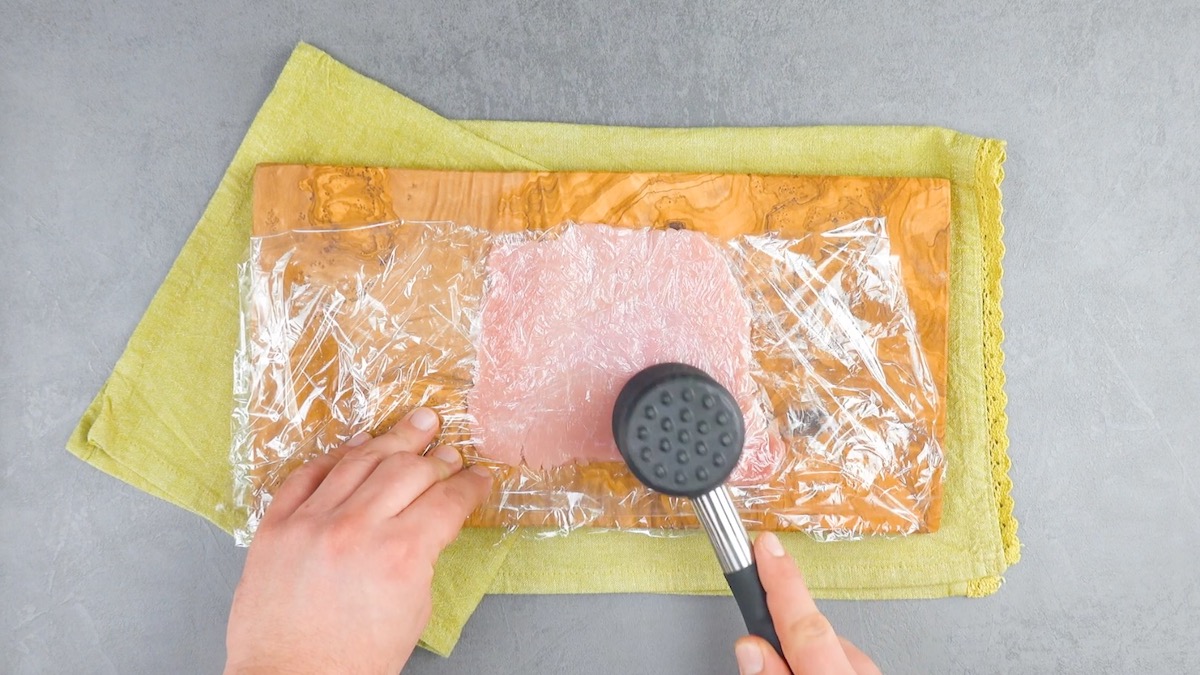 2. For the bruschetta filling, mix the tomatoes, onions, garlic, basil, and olive oil and season with salt and pepper. 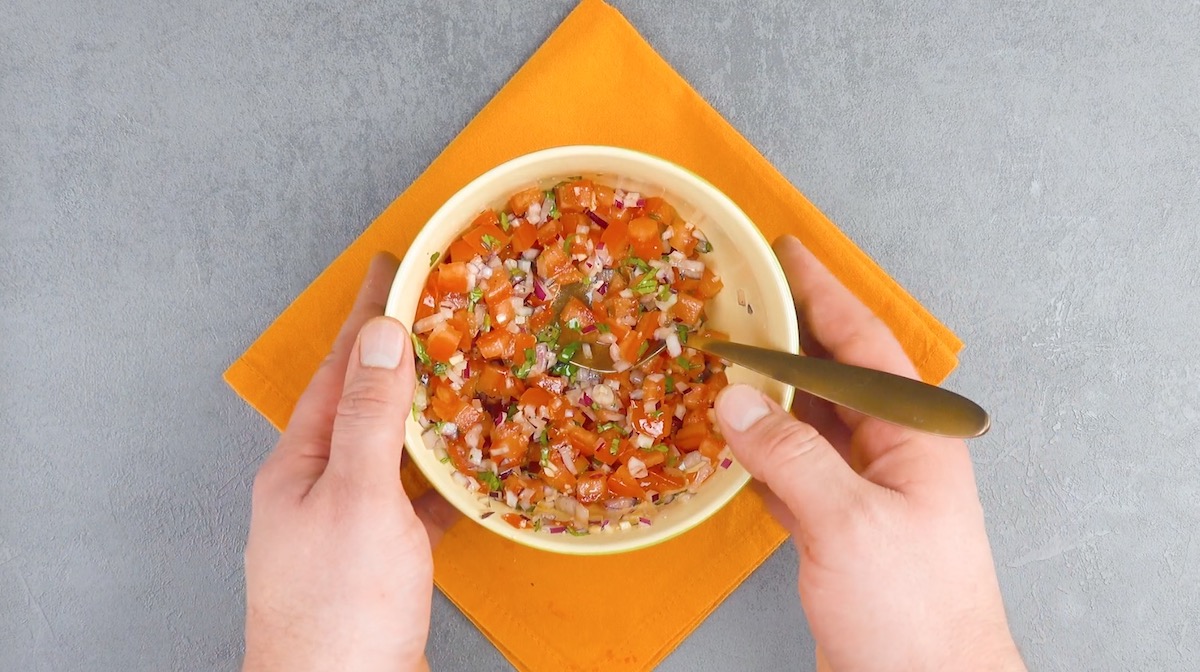 3. Spoon a tablespoon of the bruschetta filling into the center of each flattened pork chop and top each one with a mozzarella pearl. 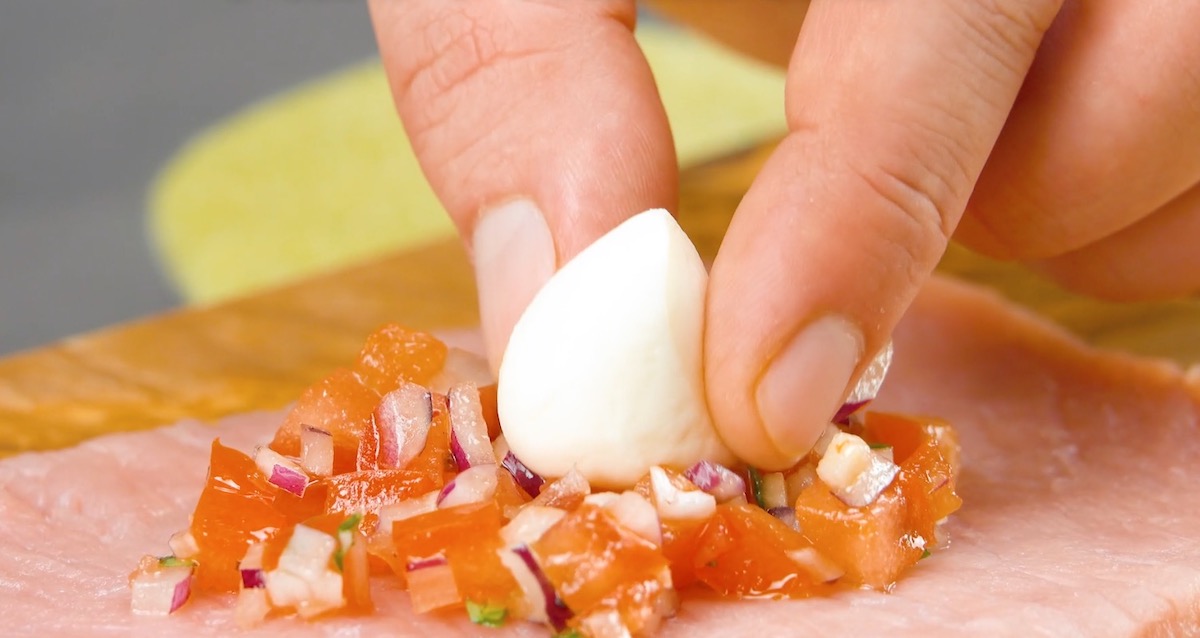 4. Fold the sides of the pork chops up to form small dumplings. 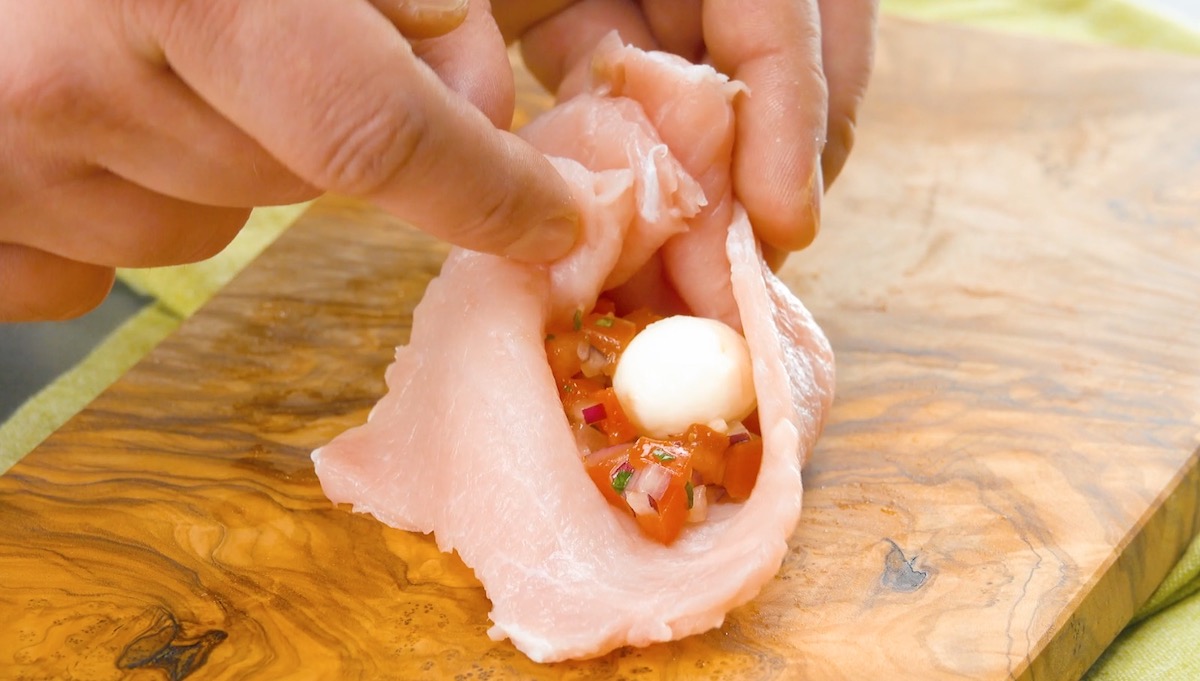 5. One after the other, slide the stuffed pork dumplings onto the wooden skewer.

TIP: Soak the wooden skewer in water beforehand to make it easier to slide the pork dumplings on it. 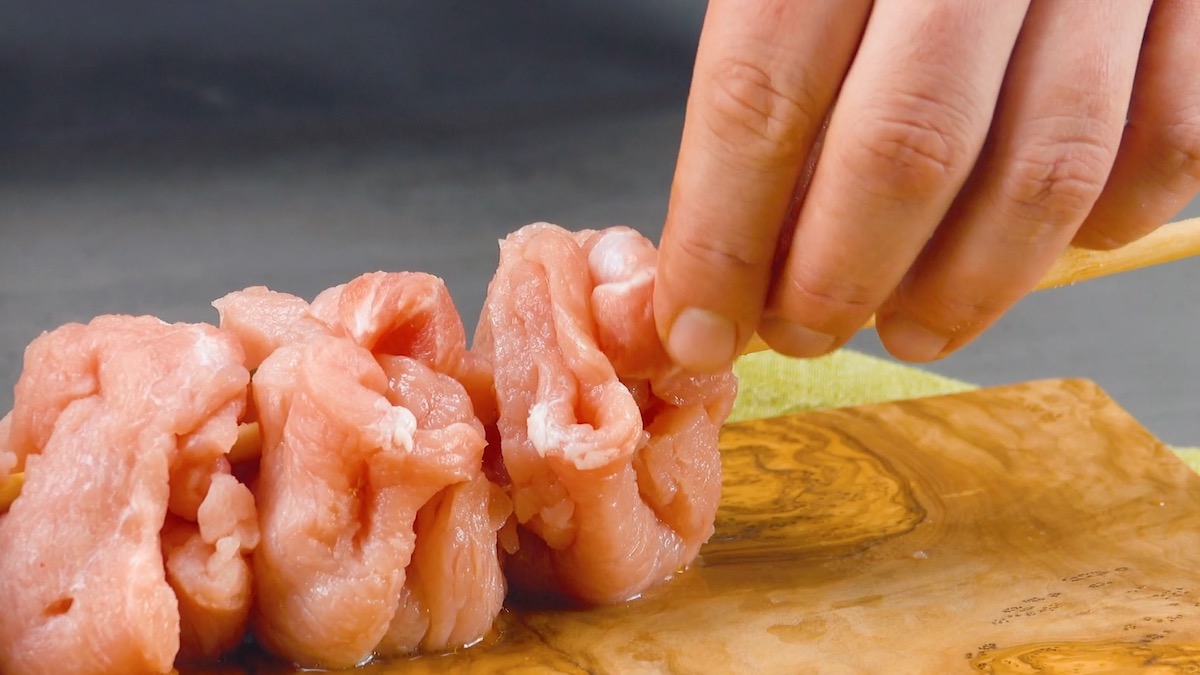 6. Mix all the ingredients for the marinade in a casserole dish and dip the pork dumplings in it. Then pour the marinade over the dumplings and let them marinate for about 30 minutes. 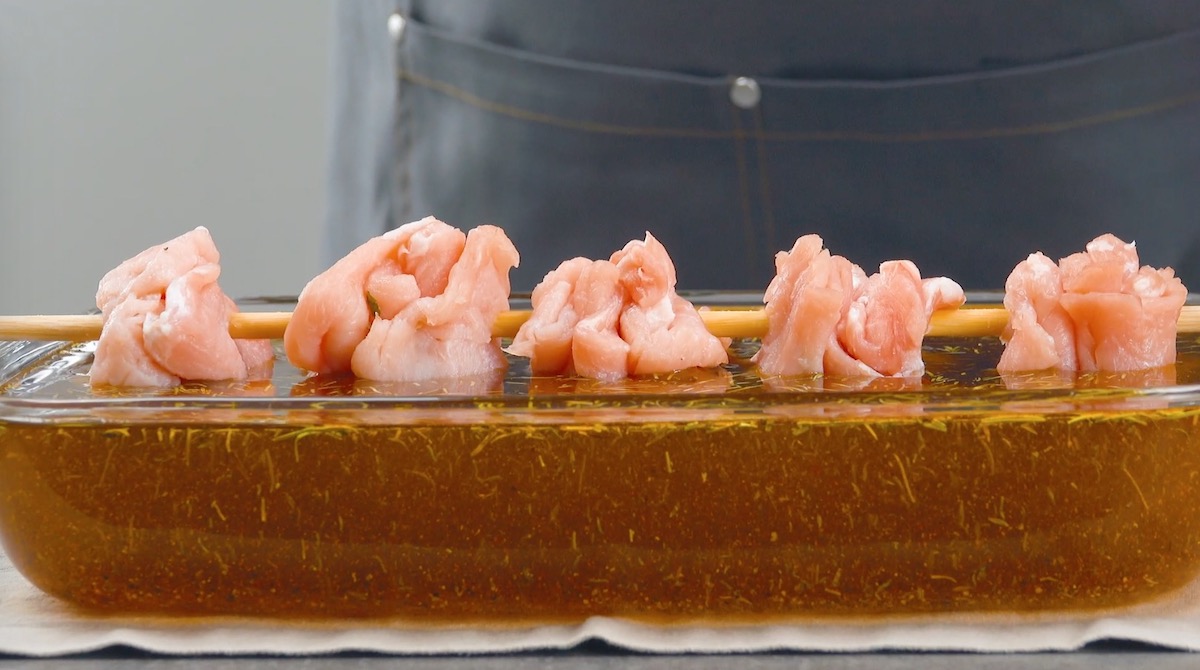 7. In the meantime, preheat the oven to 375°F and prepare the bacon tomato cream sauce. Sweat the bacon and onion, then add the tomato paste and fry it off briefly. Deglaze with white wine and let the sauce boil down. Add the heavy cream, season with pepper, and let it cook down to the desired consistency. Remove the wooden skewer with the pork dumplings from the marinade and let them drain. Then slide the wooden skewer into the oven and cook the pork dumplings for about 12 minutes until golden brown. Remember to put a baking tray under the pork dumpling to catch the drips. 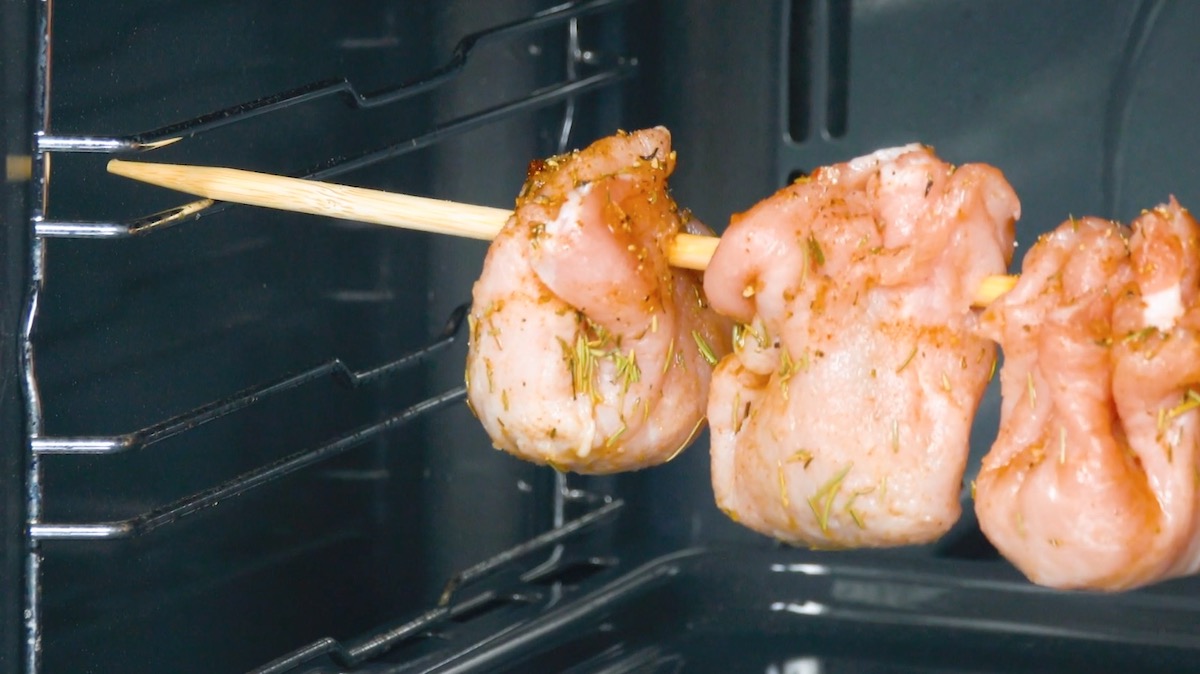 8. Pour the bacon tomato cream sauce over the pork dumplings and serve them with mashed potatoes and sautéed veggies. 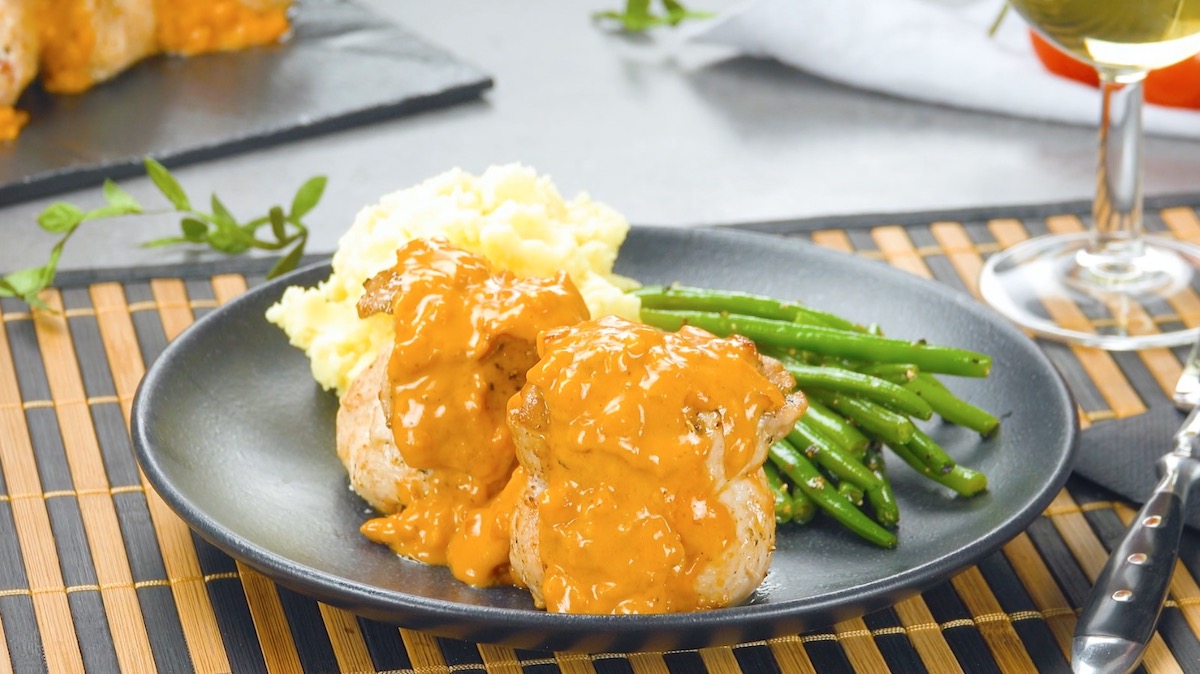 These pork dumplings are completely unique. After all, who would have thought putting a bruschetta and mozzarella filling into a piece of pork would turn out to be so delicious? The filling works really well with the creamy bacon tomato sauce and makes this dish truly irresistible, so don't hesitate to try this recipe!

Get the recipe for the Pork Roast With Apple Stuffing featured in the bonus video.