With Easter on the way, it's time think up some innovative breakfast ideas to mark the occasion accordingly. We hope the following recipes will give you plenty of inspiration and put a smile on your loved ones' faces. Give them a try and let us know what you think!

1. Start by peeling both hard-boiled eggs and then halve one of them lengthways. Do the same again to one of the halves of egg.

2. Cut the underside from the second egg and slice off an inch-thick piece. The next slice should be slightly thicker.

3. Place the slice you just cut on the bottom third of the plate on which you're arranging the Easter Bunny. Next, place the half of the first egg on the part of the plate where there's more space; the yolk should be facing upward. On the other side, make a set of bunny ears with the two quarters from the first egg. If you get stuck, use the picture below as a guide.

4. Cut out a triangle from the carrot so that it forms a mini carrot. Place some rosemary above the mini carrot to make a stalk.

5. Next, turn your attention back to the first slice of egg you placed on the plate. Use six rosemary needles to create a set of whiskers and then place mini carrot triangle on top for the nose. Use tweezers to place two sesame seeds above the nose to form the eyes.

6. Use what's left of the second egg to create a pair of legs and a tail. 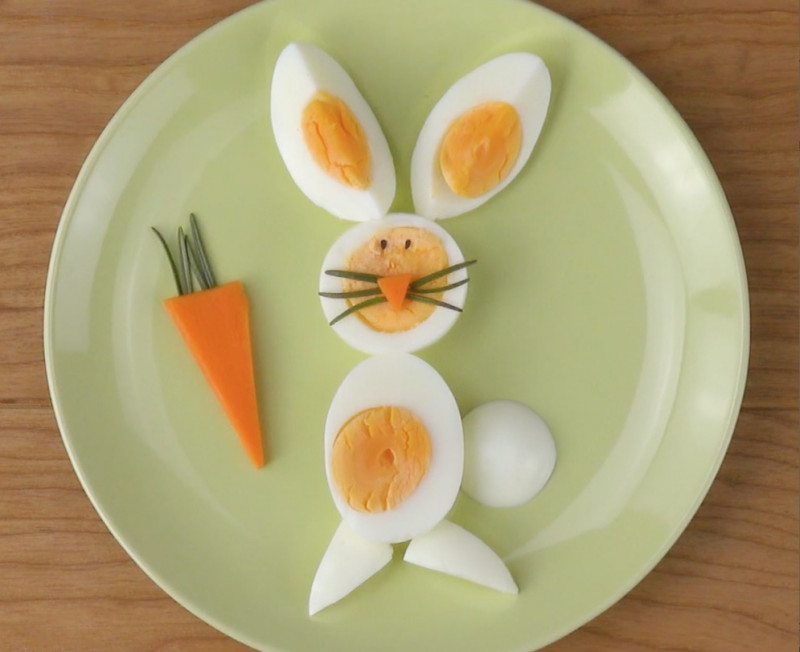 1. First, fry an egg in some oil. The fried egg should have a consistent shape. Place it just below the center of a plate.

2. You can use the same pan in which you cooked the egg to fry the bacon. Place the two bacon slices above the egg to form the ears.

3. Use the chives to create whiskers next to the egg yolk "nose." To finish, place two blueberries on the egg white between the nose and ears. 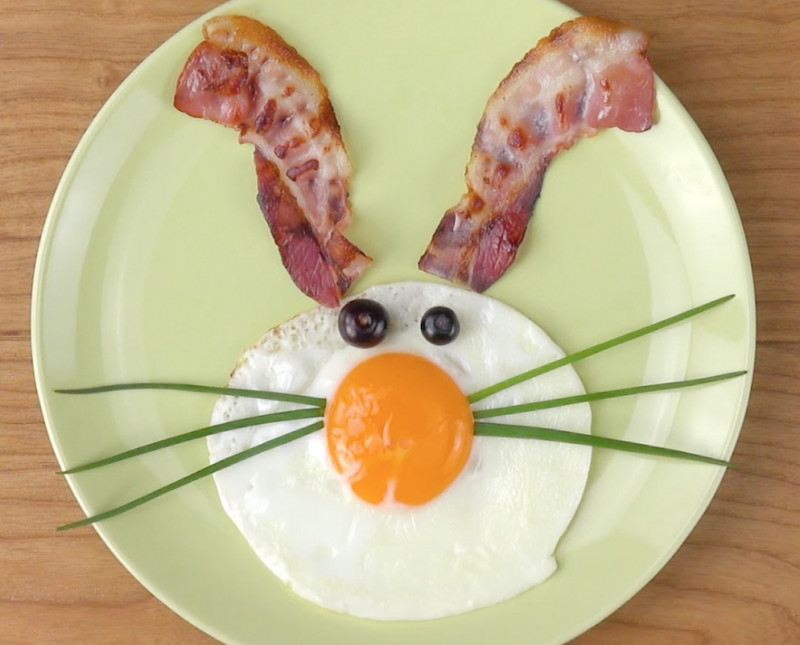 1. First, use a cookie cutter in the shape of a bunny to create a hole in a slice of toast. Next, heat up some oil in a pan and place the slice of toast on top.

2. Now whisk the egg and pour it into the bunny-shaped hole. Cook until the scrambled egg is ready.

3. Before serving, decorate the bunny-shaped egg with some chives and a sesame seed. It's best to use tweezers when doing so. 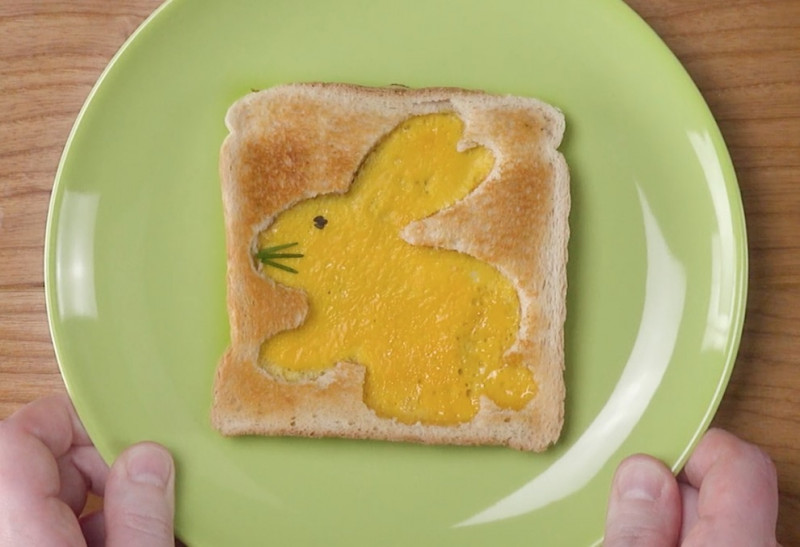 2. Cut out a small triangle from the carrot to create the chick's "beak" and place it in the center of the egg yolk.

3. Next, cut out two feet from the carrot for the chick and place them below the egg yolk.

4. To finish, place two sesame seeds above the egg yolk to form the eyes. 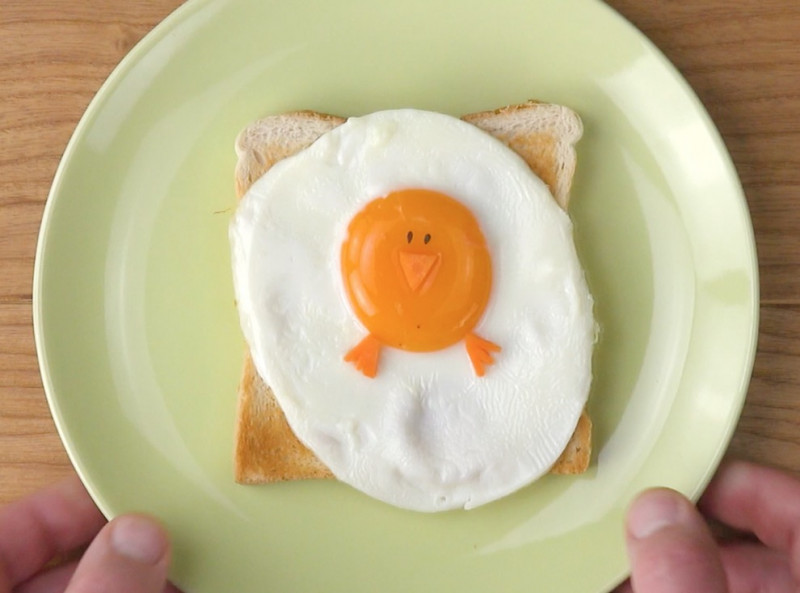 Your chick is done — almost too cute to eat! 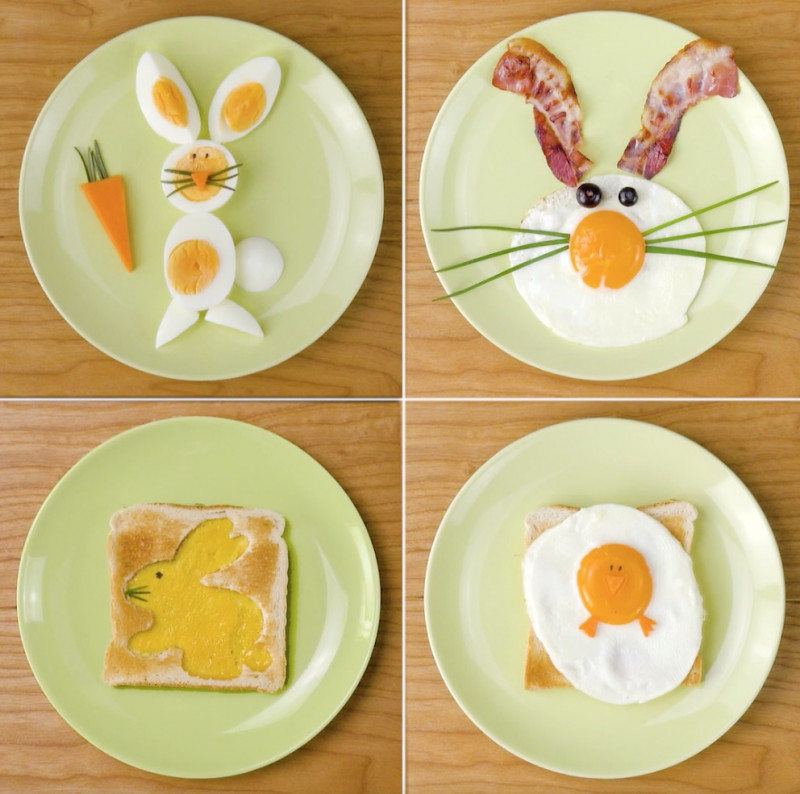 These charming recipes are sure to be a winner at the breakfast table over the Easter weekend. And the best thing about these great-tasting works of "art" is that they set you up perfectly for the rest of the day. Happy Easter!