If you're looking for a satisfying meal to try your hand at, but you're just learning how to cook, then this recipe is for you! Super quick to prepare and simple to make, this recipe for criss-cross spinach chicken only requires basic cooking skills, but its taste is anything but basic. Lightly seared chicken breasts get stuffed with spinach, topped with mozzarella cheese, baked alongside loaded potatoes, and served with a side of homemade red pesto, bringing you an elegant combination of flavors that you won't be able to get enough of. What an irresistible dish!

For the criss-cross spinach chicken:

For the loaded twice-baked potatoes:

For the red pesto:

1. For the criss-cross spinach chicken, make incisions in the tops of the chicken breasts in a criss-cross pattern and season with salt and pepper. Heat the olive oil in a pan over medium heat and briefly sear the chicken, cut-side up, until the incisions begin to spread out. Flip the chicken breasts over, briefly sear them on the other side, and then place them on a baking tray. Melt the butter in a pan over medium heat and sauté the garlic in the melted butter. Add the spinach to the pan, season with salt, pepper, and nutmeg, and sauté the spinach. Spoon the sautéed spinach into the slits in the chicken breasts. 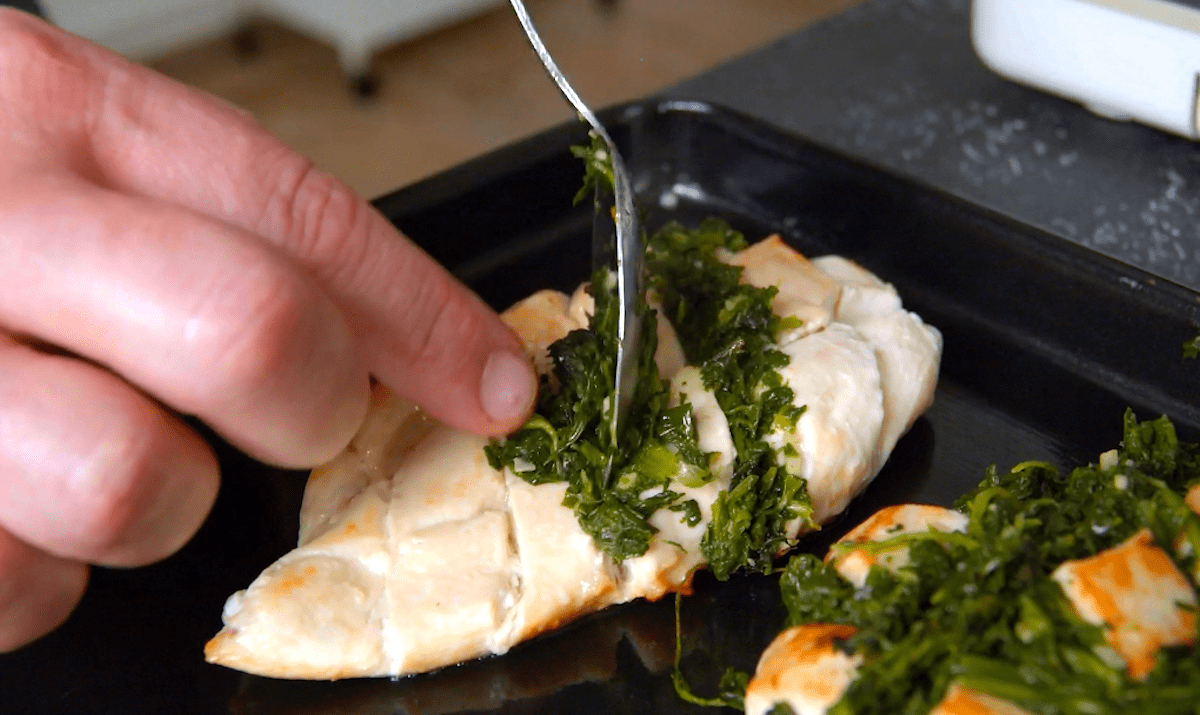 2. For the loaded twice-baked potatoes, place the baked potatoes on the baking tray next to the spinach-stuffed chicken breasts. Cut a wedge out of each baked potato, remove the skins from these wedges, and mash the skinless potato wedges in a bowl with a fork. Add the bacon bits, parsley, and ¼ cup shredded mozzarella cheese to the bowl. Cut the hard-boiled egg lengthwise and widthwise in an egg slicer, add the small pieces to the mashed potato mixture in the bowl, season with salt and pepper, and mix to combine. Lay out the raw bacon slices, place 1 tablespoon of the potato egg mixture at the end of each slice, and roll up each slice. Place 2 stuffed bacon rolls on top of each baked potato on the baking tray and sprinkle 1 tablespoon of shredded mozzarella cheese over each loaded potato. Transfer the baking tray to a preheated oven and cook at 350°F for 20 minutes. 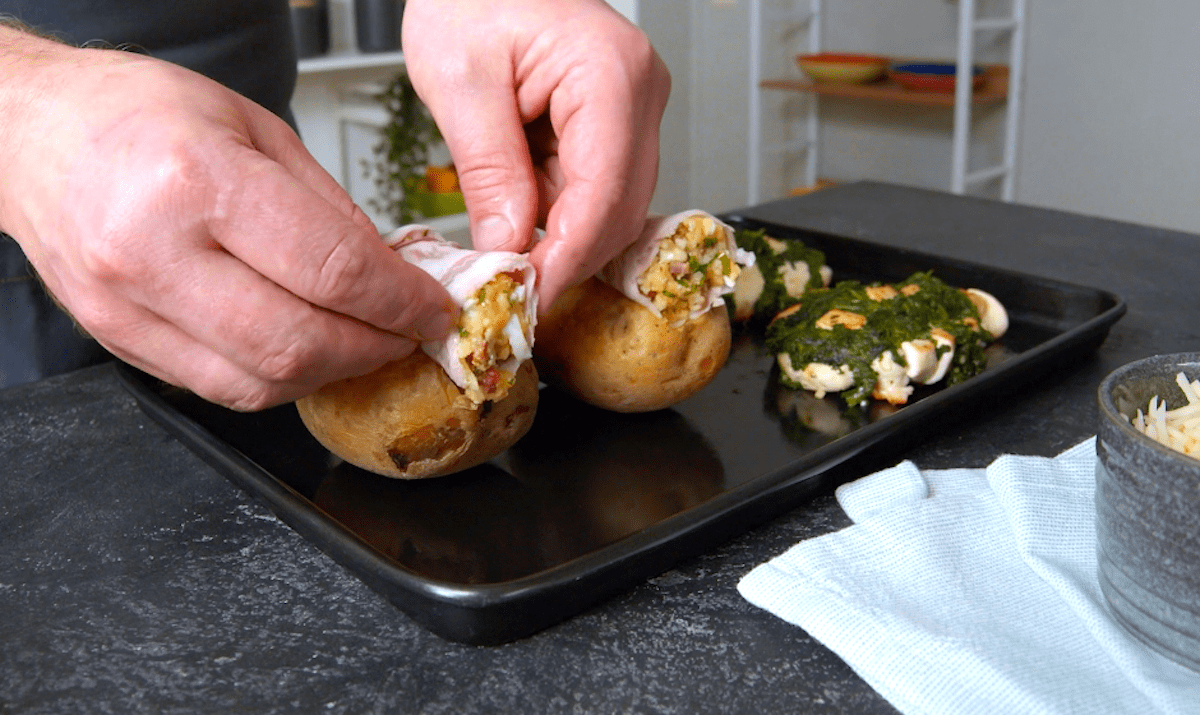 3. For the red pesto, roast the cashews in a pan over medium heat and then let them cool down. Drain the sun-dried tomatoes and cut them into small pieces. Add the sun-dried tomatoes, garlic, olive oil, cooled roasted cashews, parmesan, salt, and pepper to a mortar and use the pestle to form a smooth paste. 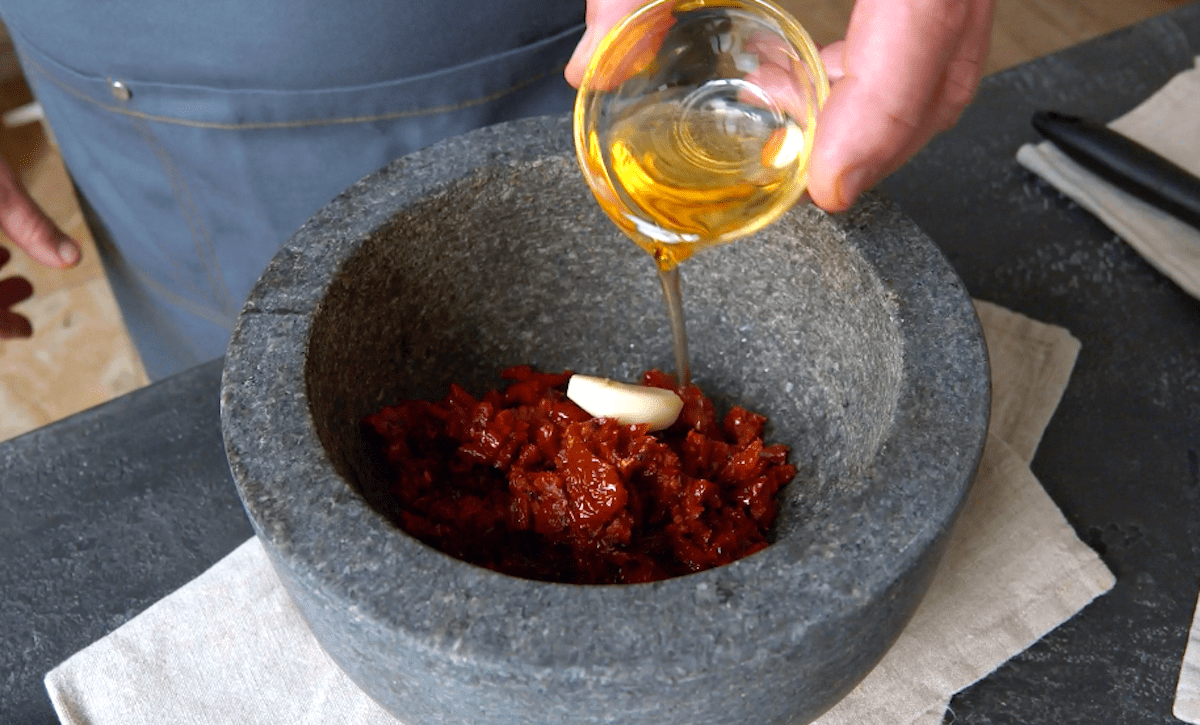 4. Garnish the criss-cross spinach chicken and loaded twice-baked potatoes with the red pesto before serving. 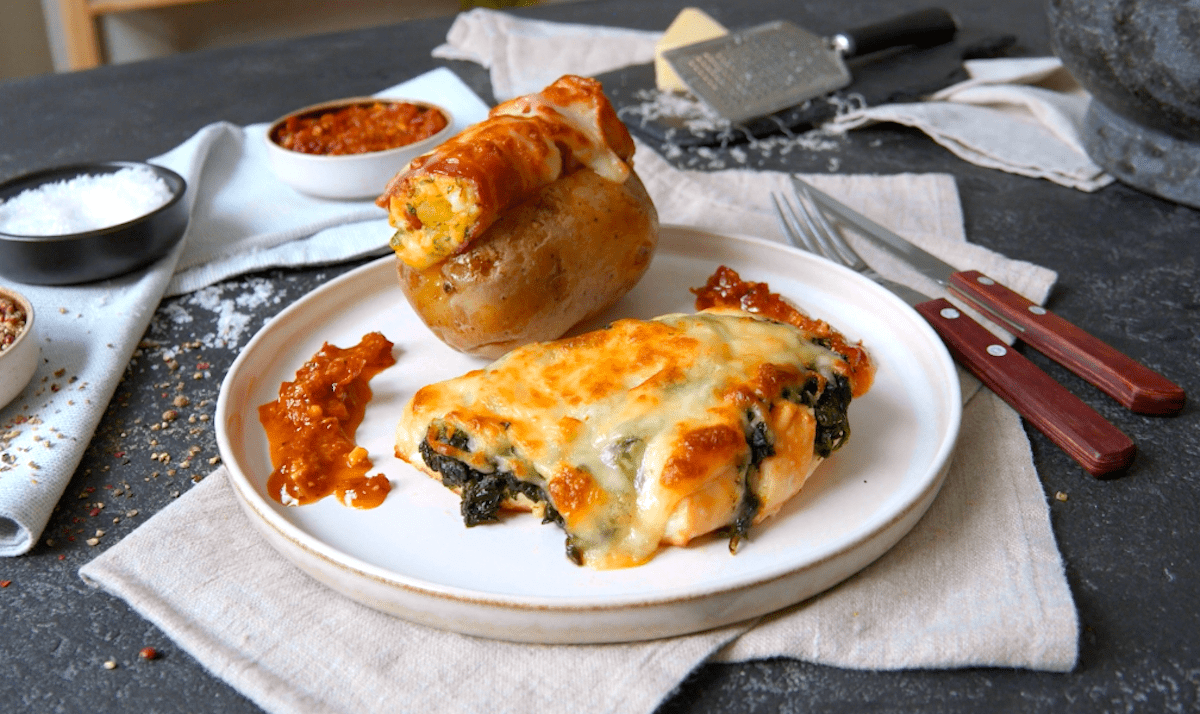 Once you give this recipe a try, you'll be shocked at how little effort it takes to make. Looking to impress family, friends, or even a new date? Then this criss-cross spinach chicken served with twice-baked potatoes has your name written all over it!

Get the recipe for the Bacon Spinach Omelet Roll featured in the bonus video.