Chocolate and pineapple are 2 flavors you don't see together very often, and we have no idea why that is. The rich, sweet flavor of chocolate compliments the pineapple's tangy, tropical taste in ways you wouldn't believe! In honor of this underutilized duo, we've come up with a recipe for an incredibly rich chocolate cake, absolutely stuffed with pineapple cheesecake cream and fresh pineapples. But the best part isn't even this cake's taste! Adorable meringue domes and candied lime peels come together to look just like a mini pineapples sitting on top of the cake, making this dessert look just as amazing as it tastes! From its unique, delicious flavor right down to its gorgeous presentation, this chocolate cake with pineapple cheesecake cream is a tropical dream of a dessert.

For the meringue domes:

For the candied lime peels:

For the chocolate cake:

For the pineapple cheesecake cream: 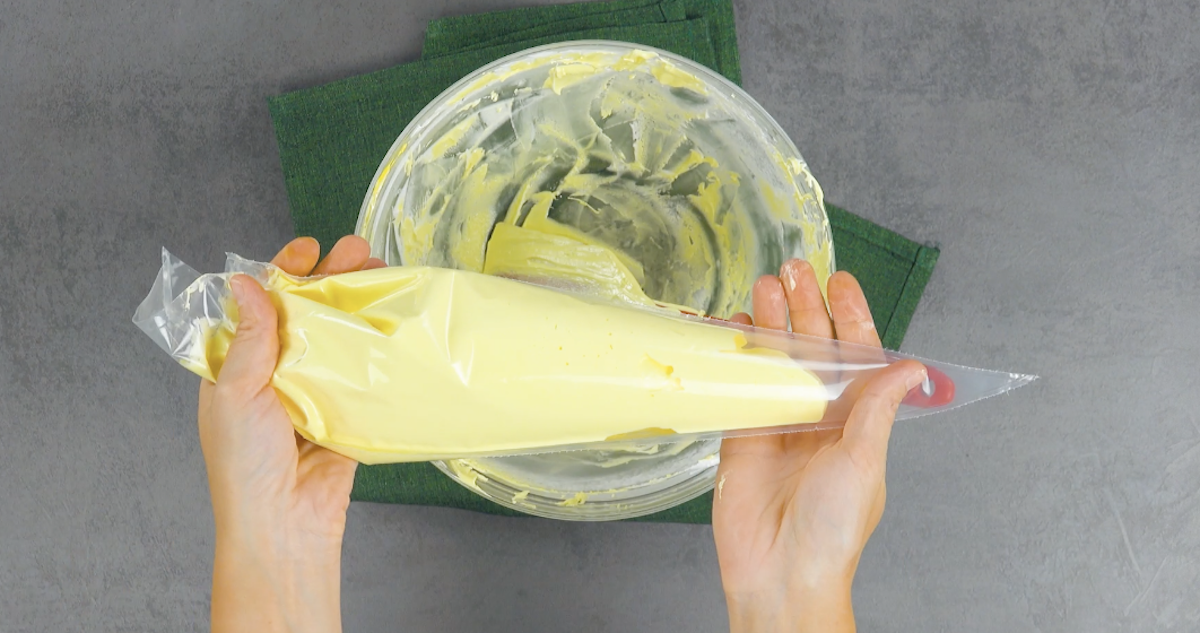 2. Thoroughly wash and cut 2 limes in half, then place 3 of the halves face down on a baking tray lined with parchment paper. Pipe small dots of the meringue onto the outside of the limes until they're completely covered. Transfer the baking tray to the oven and bake the meringue domes at 150°F for 6 hours. 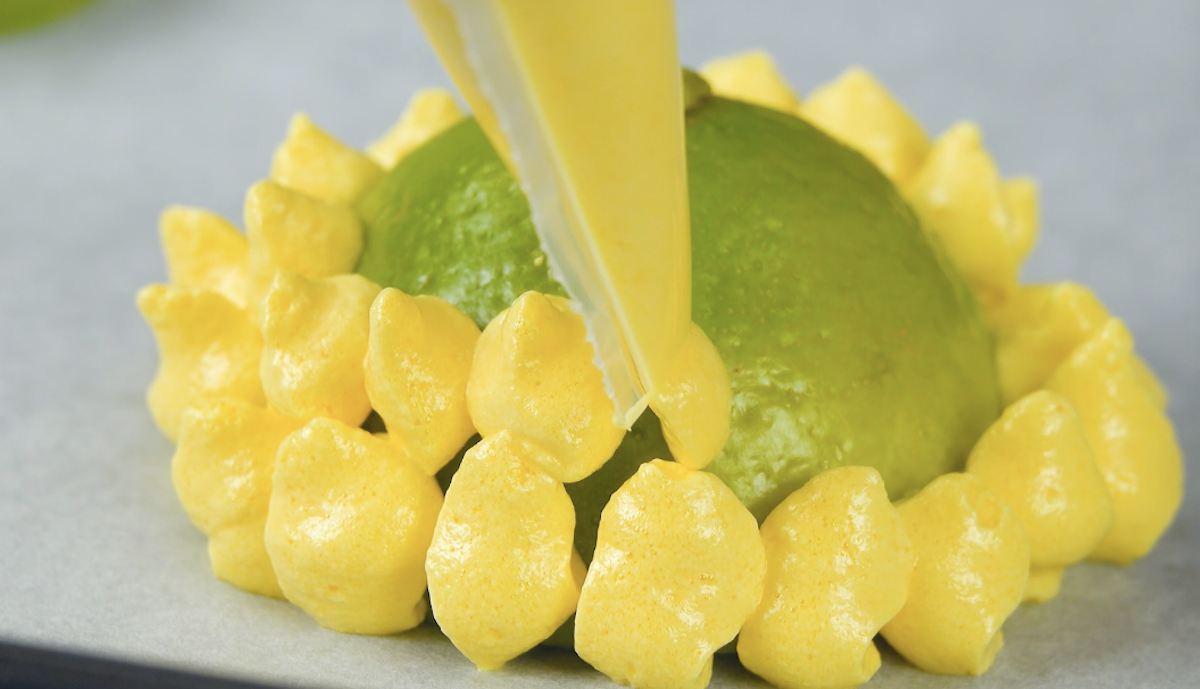 3. For the candied lime peels, remove the skin from the 3 limes, slice them, heat them in a saucepan along with the sugar and water, and let the mixture simmer for 20 minutes. For the chocolate cake, preheat the oven to 325°F and grease a loaf pan. Separate the eggs and beat the egg whites along with a pinch of salt until stiff. In a separate bowl, beat the egg yolks along with the sugar until frothy. Stir together the cocoa powder, flour, and baking powder, then carefully fold the mixture into the egg yolk mixture. Pour the batter into the greased loaf pan, then insert 3 tall glasses directly into the batter. Transfer the loaf pan to the oven and bake the cake at 325°F for 45 minutes. 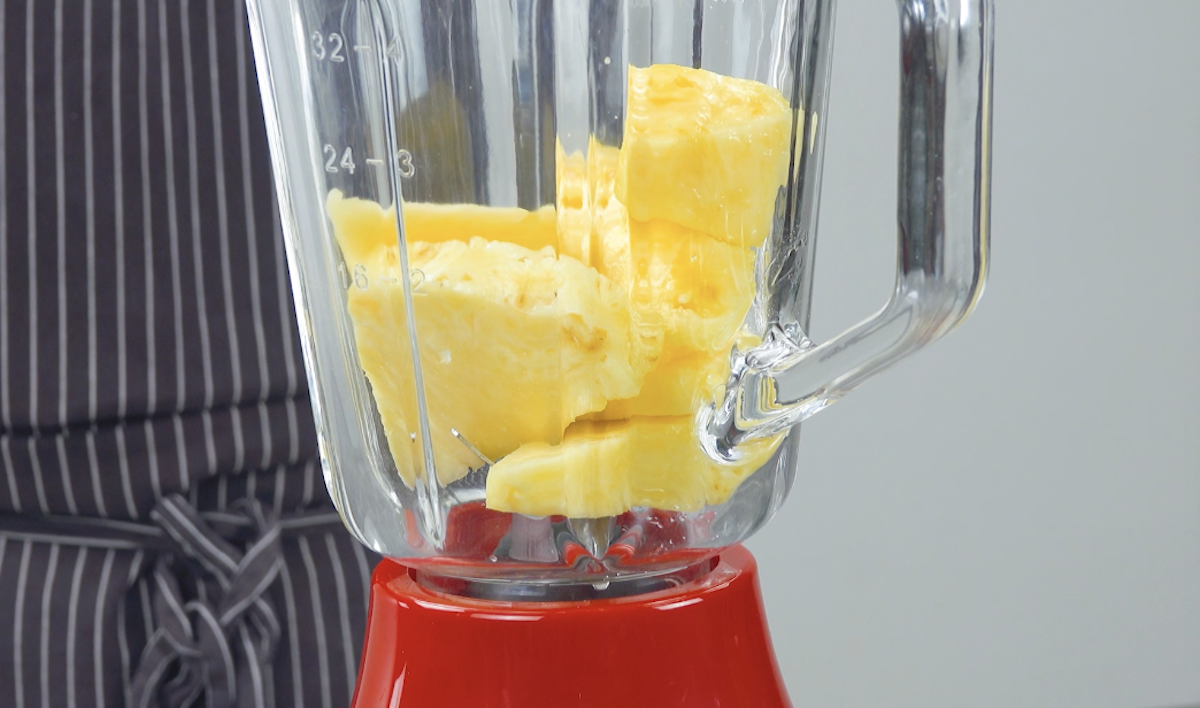 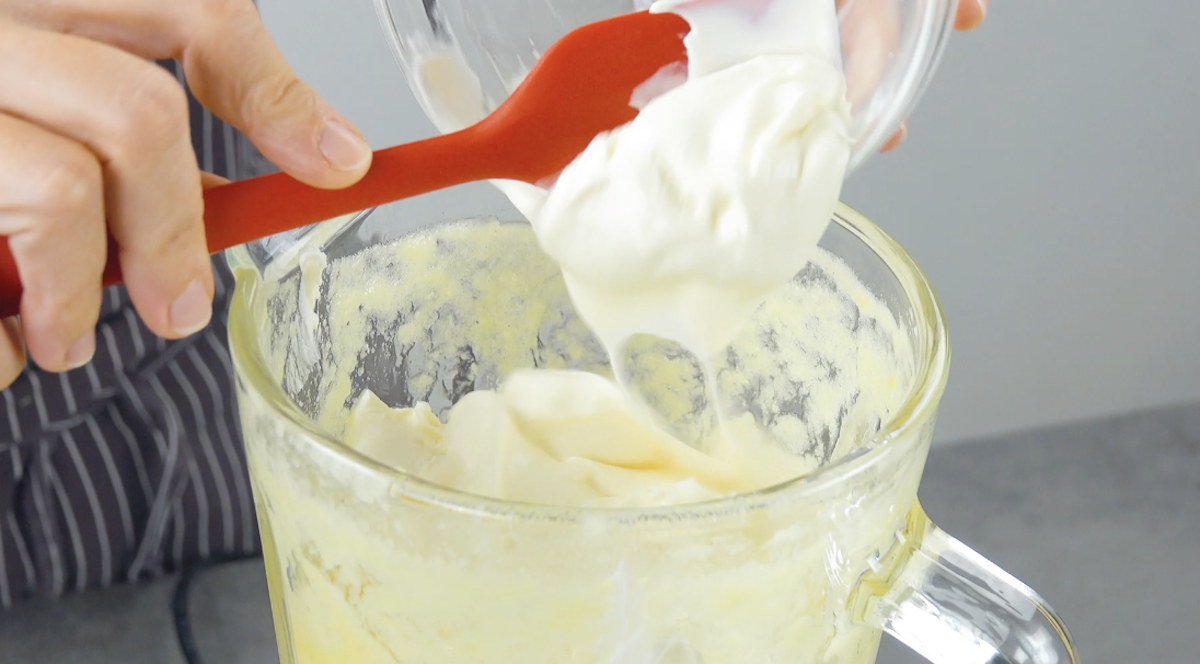 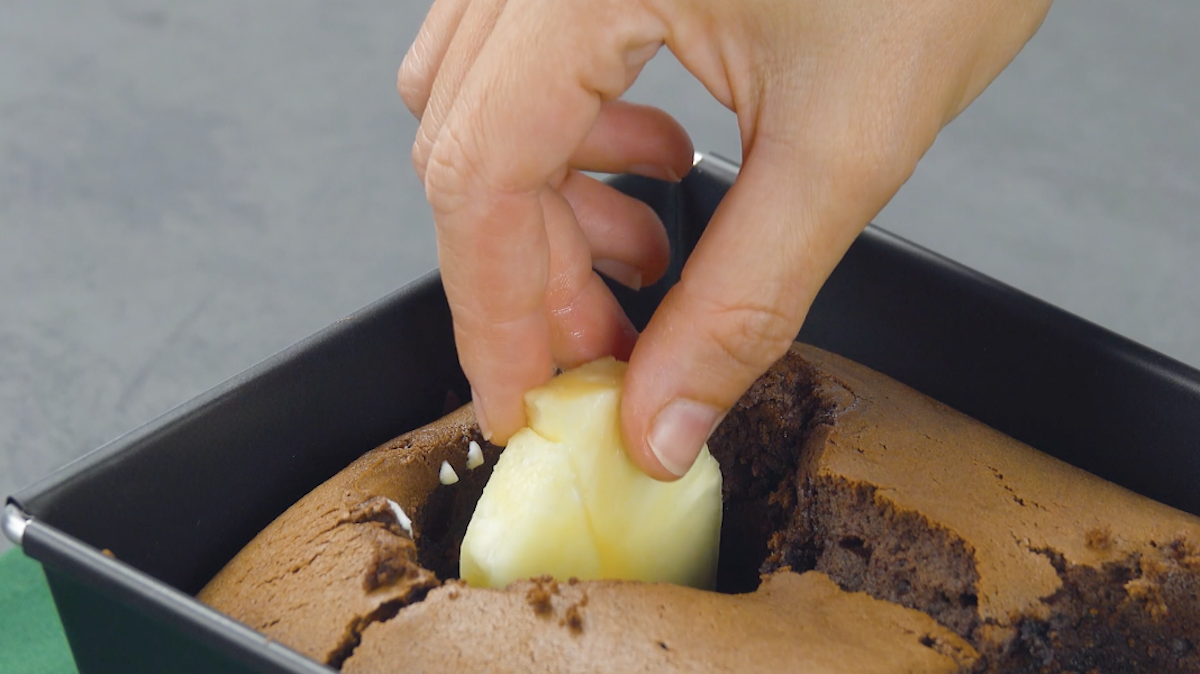 7. Remove the lime halves from under the meringue domes and fill the domes with pineapple cheesecake cream. Place the filled meringue domes on top of the cream-filled holes in the chocolate cake. 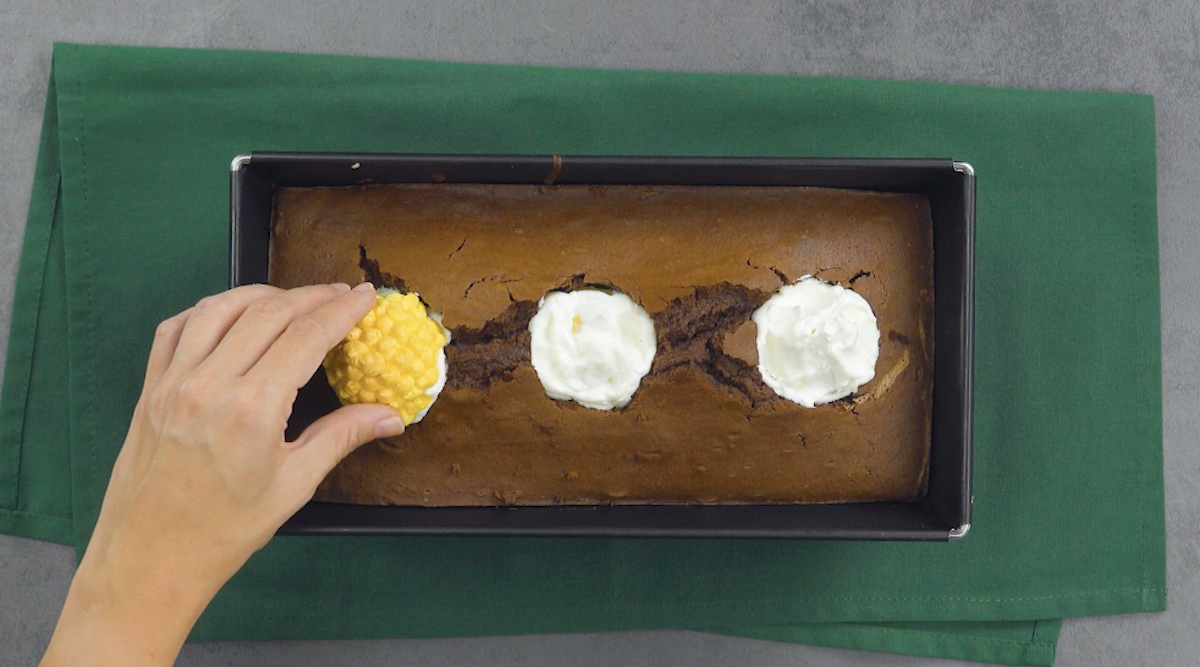 8. Skewer several of the candied lime peels with toothpicks and stick them into the top of meringue domes. Use a culinary torch to lightly toast the outside of the meringue domes. 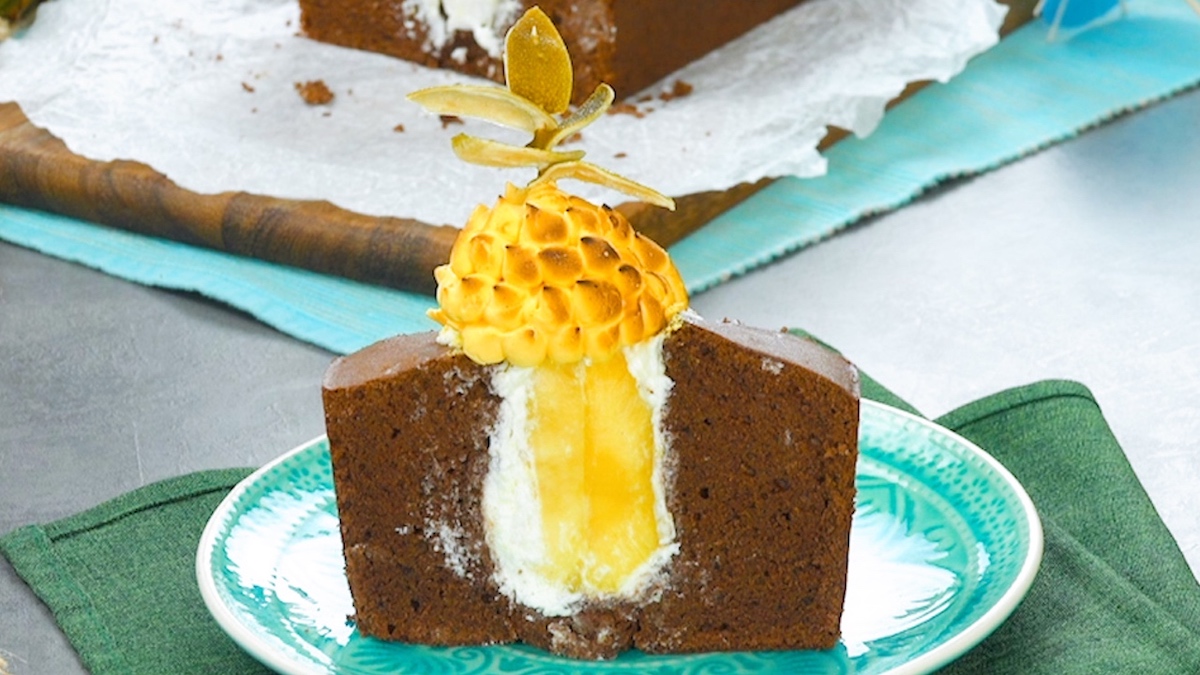 This chocolate pineapple cake is a show-stopper of a dessert. Its creamy pineapple cheesecake core and adorable meringue pineapple decoration give this cake an amazing tropical flair that can't be beat!

Get the recipe for the Pineapple Meringue Cake featured in the bonus video.