Bagels are a classic breakfast staple that nobody could live without. Plain bagels toasted with butter, everything bagels slathered in cream cheese, or sesame bagels loaded up with delicious toppings for lunch – nobody can deny that the bagel is as versatile as it is delicious. We just can't get enough of 'em, so we decided to make their size and flavor even bigger and better. As you can probably tell, our recipe isn't for just your standard, everyday bagel – we went HUGE and and created an XXL bagel. But while we were trying to find toppings as epic as the bagel itself, we just couldn't make up our minds! So we came up with 3 mega delicious bagel sandwiches, served XXL-style so that you can feed the whole family or all of your friends at your next big brunch. You'll never serve breakfast the same way again!

For the XXL bagels:

For the breakfast bagel:

For the PB&J bagel:

For the veggie delight bagel:

1. Preheat the oven to 350°F and grease 3 large bundt cake pans. To make the XXL bagel, heat the milk up in a saucepan until it becomes warm, then stir in the sugar and dry yeast. Once combined, add in the flour, salt, and butter, then knead the mixture until a smooth dough forms. Cover the dough and let it rise in a warm place for 30 minutes. Once the dough has risen, divide it into 3 equal segments and roll each one out into a thick log. Place each log of dough in a greased bundt cake pan, forming a circle with the dough. Brush milk over the surface of the dough and sprinkle sesame seeds on top, then transfer the bundt cake pan to the oven and bake at 350°F for 35 minutes. 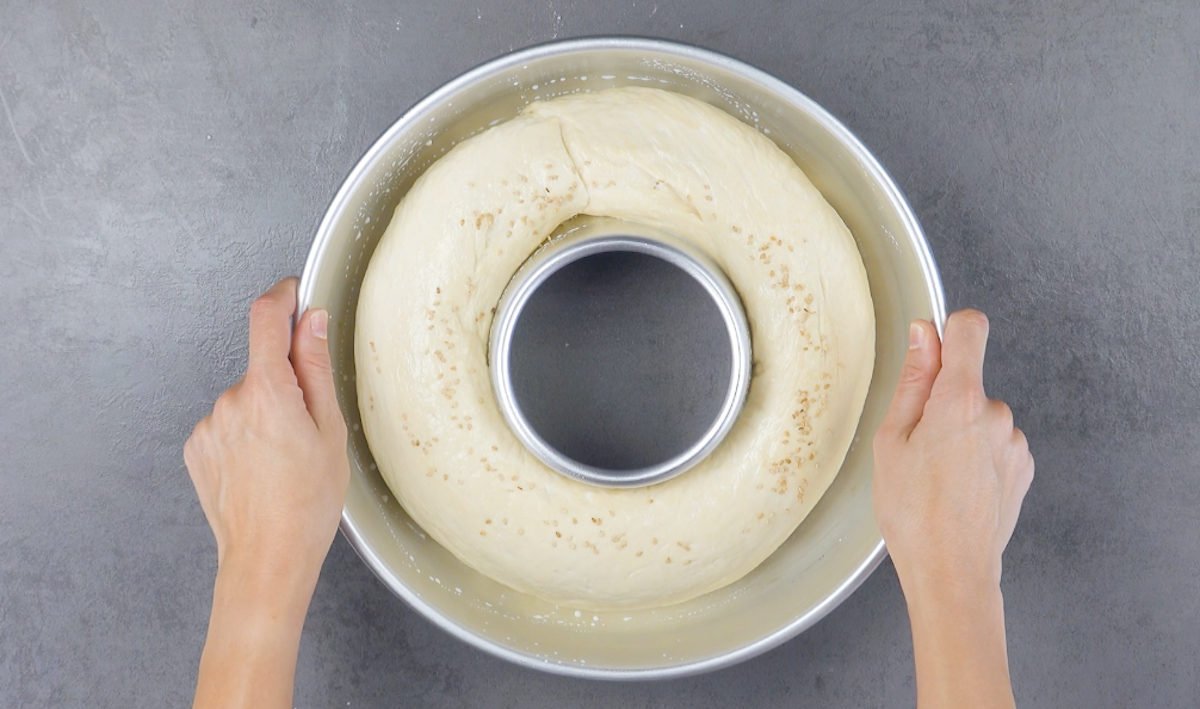 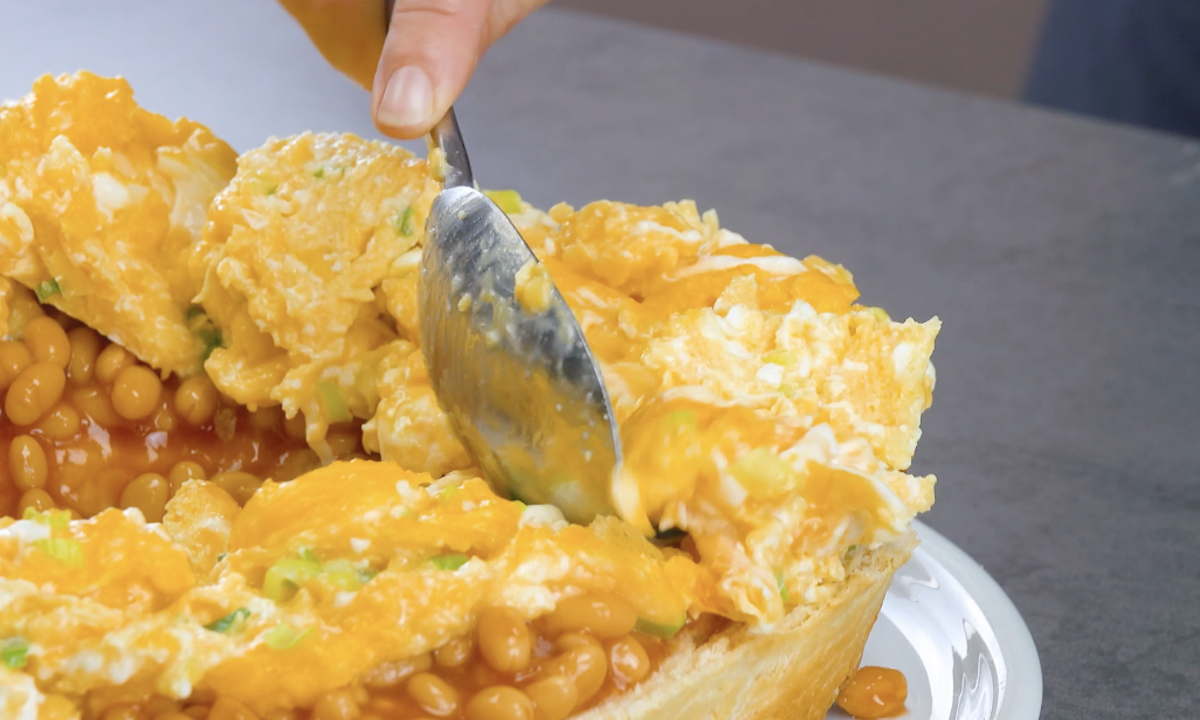 3. Press the top half of the bagel on top of the filling, cut the XXL breakfast bagel into segments, and dig in! 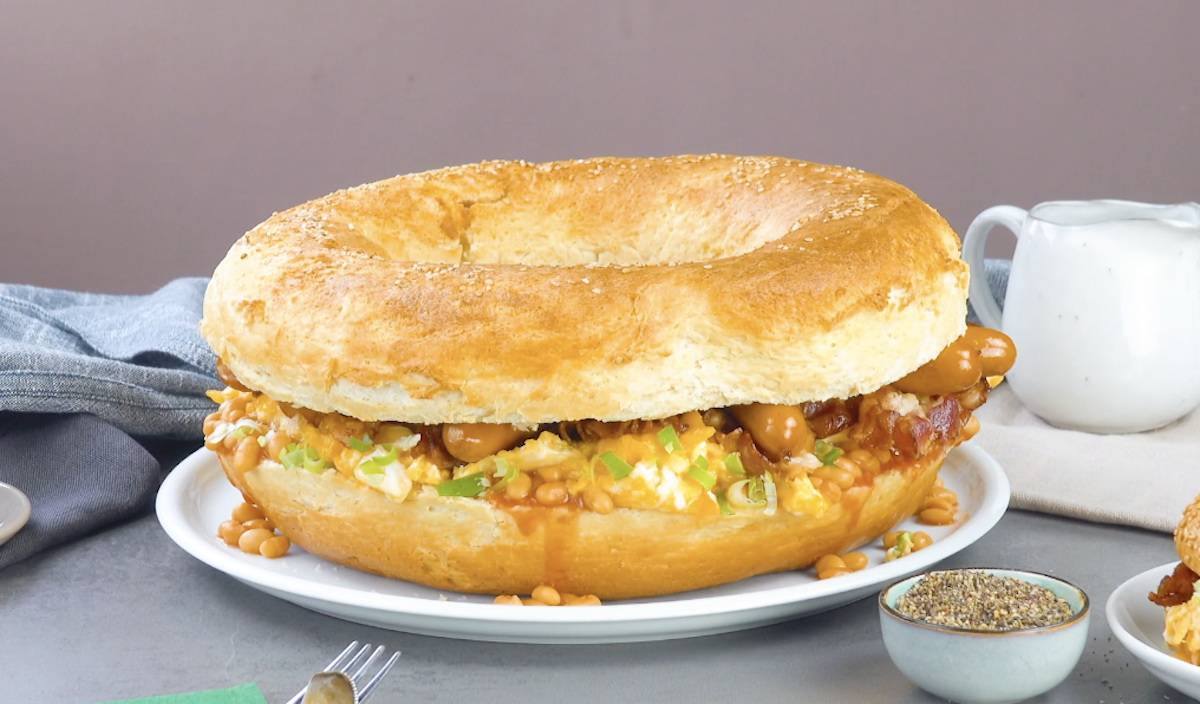 4. For the PB&J bagel, cut a baked bagel in half and spread peanut butter on the lower half. Place a layer of fresh strawberries on top of the layer of peanut butter, add a layer of strawberry jam, and sprinkle peanuts on top. 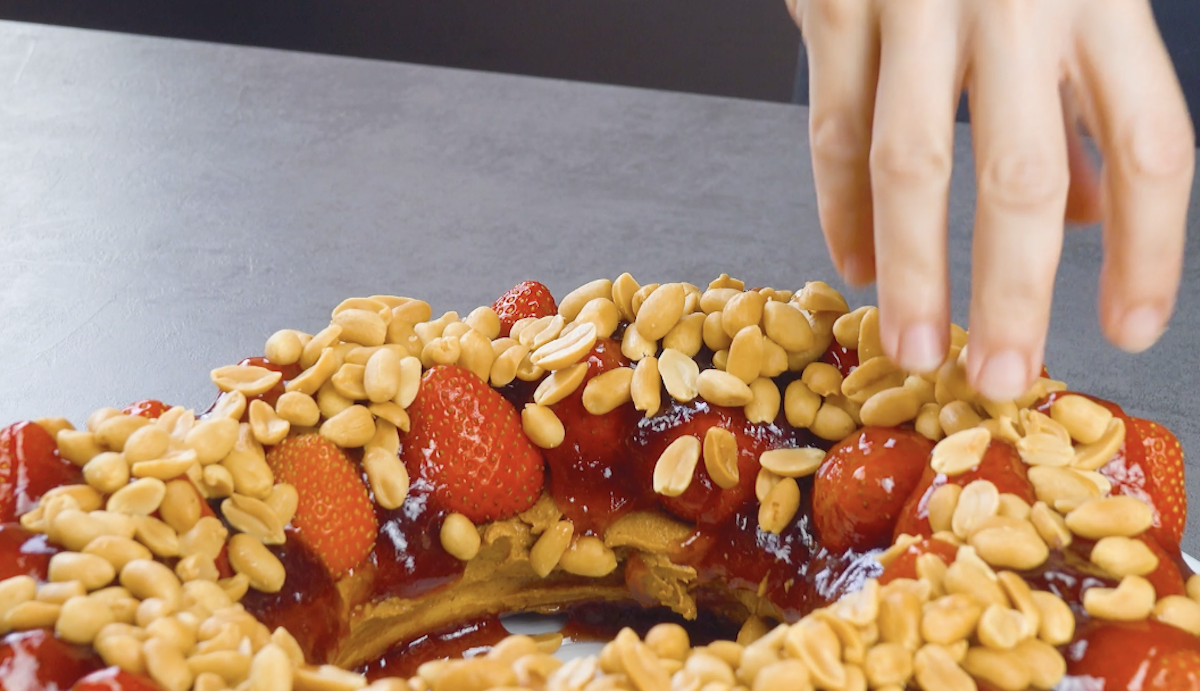 5. Press the top half of the bagel on top of the fillings, cut the XXL breakfast bagel into segments, and grab a piece as quickly as you can, before they all disappear! 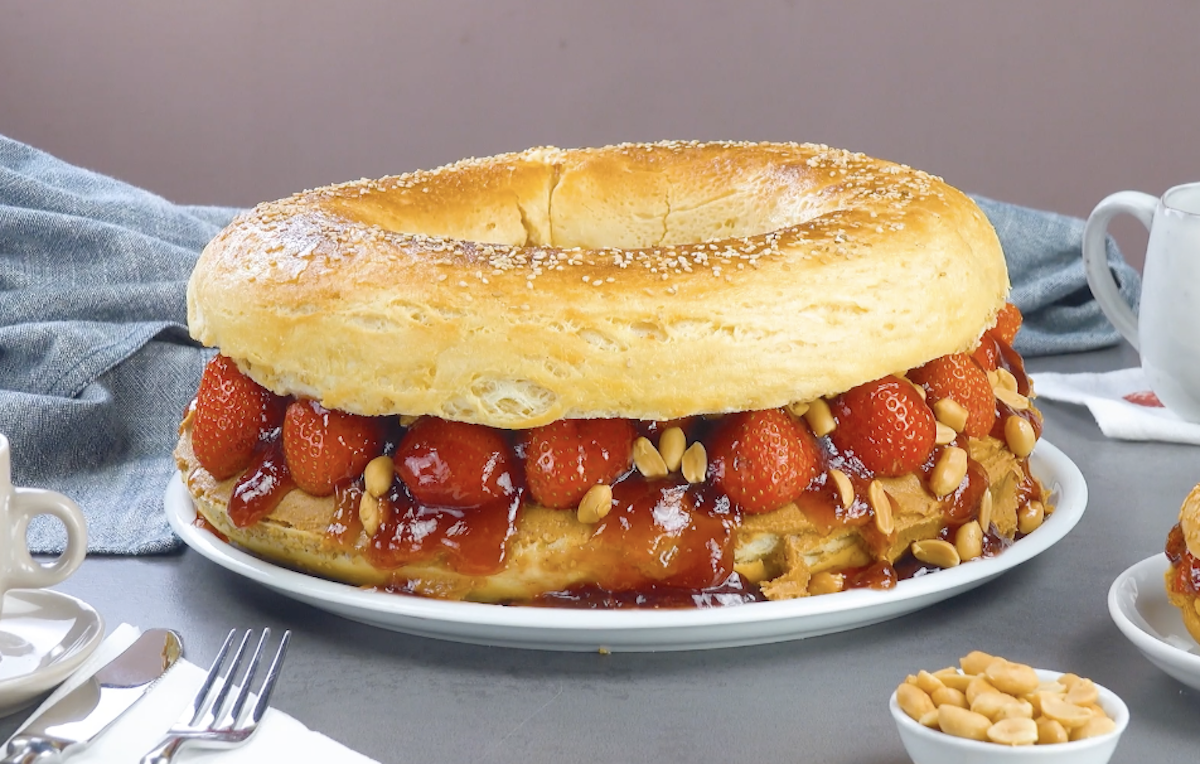 6. For the veggie delight bagel, cut the baked bagel in half and remove the top. Cut the eggplants in half and slice the zucchinis, then fry them. Slice the yellow bell peppers, onions, and tomatoes, then spread chive & onion cream cheese on the bottom half of the bagel. Top the layer of cream cheese off with the prepared vegetables. 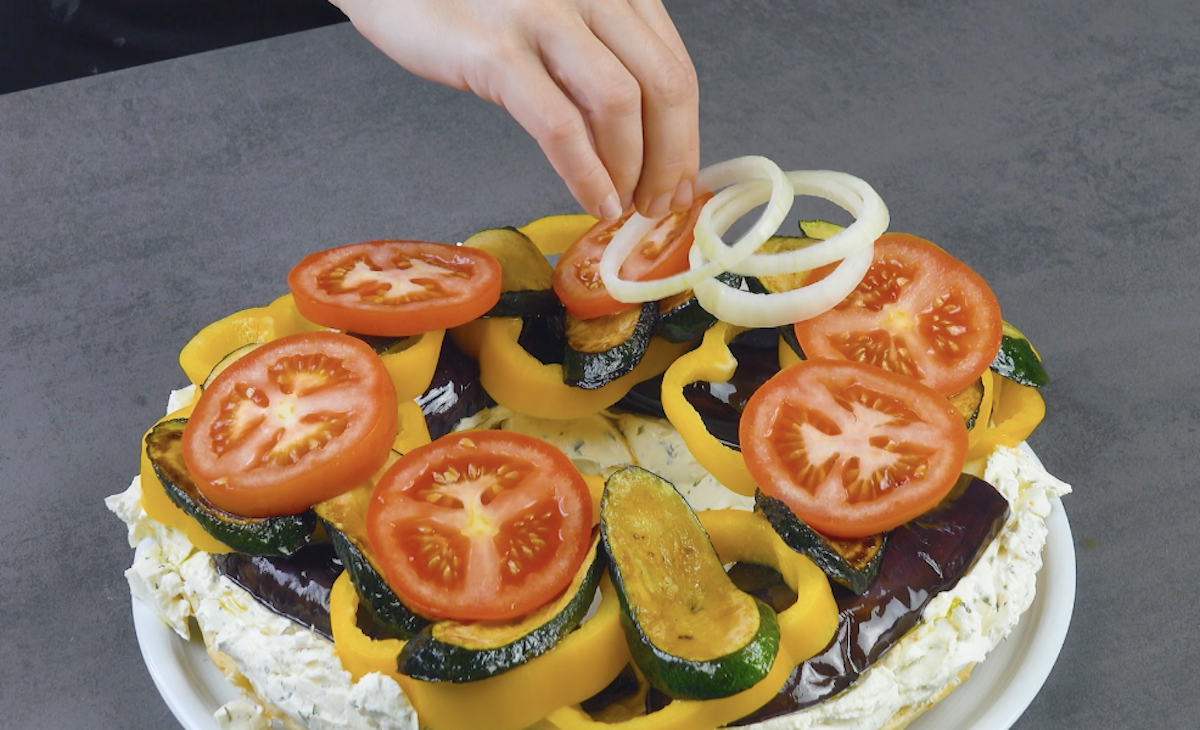 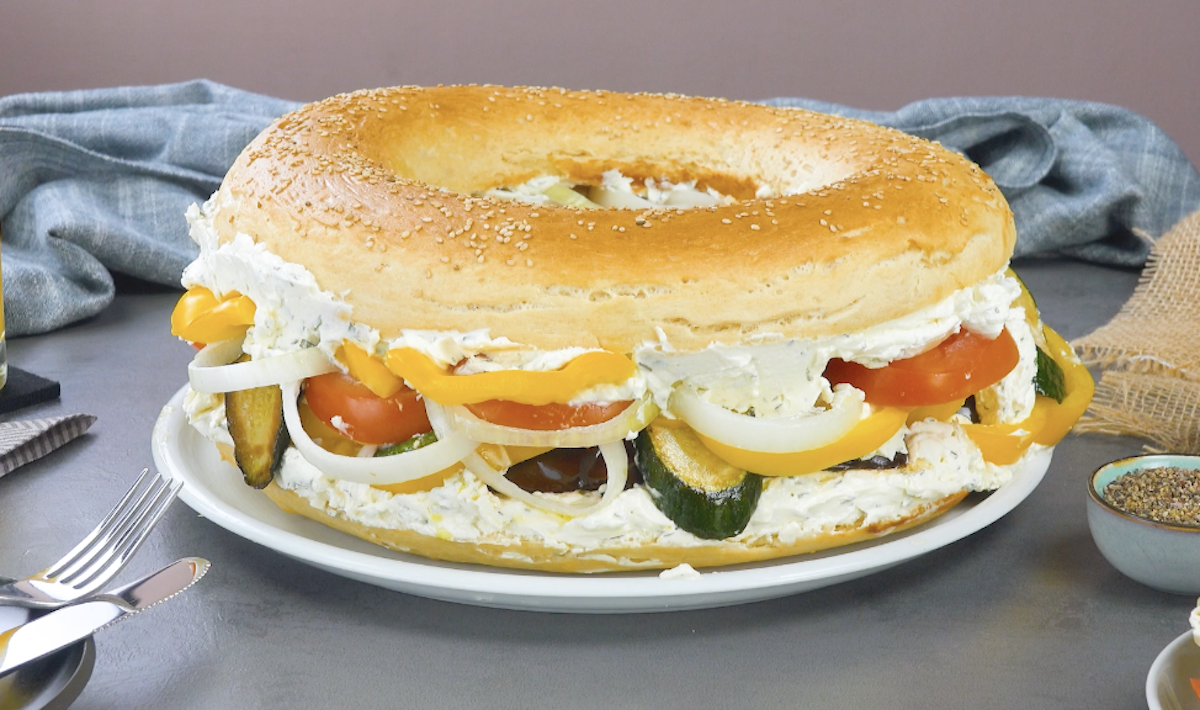